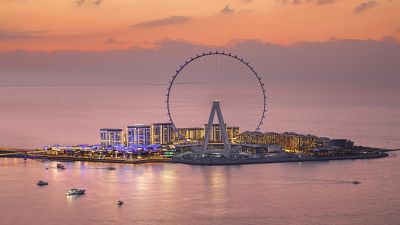 The worlds largest observation wheel opens to the public on October 21st. The wheel situated on the coastline of Dubai stands over 250 meters tall setting a new Guinness world record. Its called 'Ain Dubai' (which means Dubai Eye in Arabic) and eclipses Londons wheel 'The London Eye', which stands at only 135 meters tall.

In a city that is constantly pushing the boundaries of architecture, this latest feat was undertaken by Dubai developer Meeras, and cost almost €228 million.

Although located in the GCC region, many European countries had a significant role in constructing Ain Dubai.

The key engineering on the cabins came from France, whilst the control system and communication system was provided by Italy. Key engineering on the main structure and project management was sourced from the Netherlands and the UK. The highest level of technical expertise was ensured by a reputable independent checking engineer from Germany. Most of the steel for the project was produced in Germany, locally in the UAE and further afield in South Korea.

Mohamed Sharaf, the Chief Operating Officer of Dubai Holding Entertainment, told Euronews that the project will boost Dubai's tourism. He said, "Ain Dubai is a testament to one of the many innovative initiatives developed by Dubai to further enhance its competitiveness as a key international tourism destination in continuation of Dubai's drive to achieve new global heights."