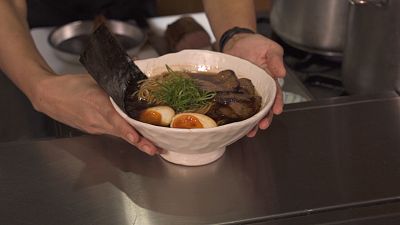 Indian expat Dubai resident Neha Mishra spent 15 years working as a producer in the emirate before following her appetite for an entirely new career. A lover of ramen, she studied the art of crafting broth, ‘tare’ and noodles and then began having people over for dinner.

Demand for her ramen was so high, she started a regular supper club at her home. She called it ‘A Story of Food’ and it was a sell-out success with a happy ending. After eventually feeding around 7,000 people over the course of three years, Neha realised it was time for a bigger kitchen.

Collaborating with a silent investor, Neha launched Kinoya in The Greens, a leafy suburb in Dubai and today her ramen is causing a bigger stir than ever.

The secret to making delicious ramen, she admits, lies in hours of preparation and fast assembly. “It needs to be done very quickly, so it's hot,” she says, “So, each step needs to be ready to go.”

Assembling her signature shoyu (soy) ramen with beef, Neha starts with the protein, swiftly slicing plump and juicy tenderloin that’s been cooked in a soy marinade. “It has a little bit of sweetness to it from the soy and it's cooked quite raw; medium-rare. That's how I like to present it in the bowl, as the broth will continue to cook the meat,” she explains.

Next, Neha slices the egg. “If you want to judge a good ramen bowl in terms of technique, always look at the egg. If an egg is cooked well, then you know your bowl's probably thought about,” says Neha.

According to Neha, whose golden yolks are testament to her prowess, the perfect egg is brought to the boil from room temperature for exactly six minutes, then plunged in an ice bath for five to 10 minutes. Once cooled, the shell is removed and the egg is placed in a soy and mirin bath to soak overnight, giving the eggs a caramel hue.

Neha’s broth is slow-cooked for just over 12 hours – a cauldron of celery, carrots, leaks, garlic, ginger and chicken, slow-cooked to a hearty stock. Her tare recipe is a closely guarded secret. Tare is what gives ramen its addictive umami flavour because it’s made with a bounty of umami ingredients: mushrooms, bonito flakes, anchovies, soy, kombu seaweed.

It’s the first element to be added to the ramen bowl, before the broth and noodles are ladled on top, followed by sliced meat, egg and spring onion. As the final touch is added, a simple sheet of nori seaweed placed like a feather in a cap, steam should still be billowing from the bowl.