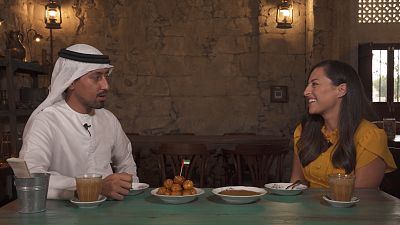 Hashem Al Marzouqi had a dream to serve Emirati history on a plate. His dream became a reality when his first Al Fanar restaurant opened in Dubai in 2011. Since then, his family brand has grown to nine branches, spanning from Dubai to London, contributing to the globalisation of Emirati cuisine.

Hashem’s son Sohail Al Marzouqi, the group’s Operations Manager, is proud of his family business and the role it plays in preserving the past.

“We wanted to recreate an old town as old as Fisherman's Village on Alhambra Island in Ras al Khaimah,” says Sohail, explaining the restaurant’s design. “We incorporated a lot of details from the artefacts, and coral walls, which they used to have back in the day. It represents the 1960s. The Sixties are when times changed, when we discovered oil. That's when the whole country developed. But back then, this is how people used to live and this is how their houses were.”

The menu at Al Fanar is equally representative of the era, with many of the recipes supplied by Sohail’s grandma. Signature dishes include machboos samak, seasoned rice topped with fried fish, and traditional desserts, such as legaimat dough balls and asidat al tamor, or date pudding.

It’s the tradition to eat by hand, using only the right hand, and at Al Fanar Seafood Market, private dining rooms offer the opportunity to be seated Emirat-style, on cushions, with a lowered table. “The main meal is served on the floor on a matt or covering, and we sit around it on floor cushions,” says Sohail, “Then, for dessert we move into another room.”

Dates play a leading role in Middle Eastern desserts. From asidat al tamor, made with date pulp and flour, to legaimat, dough balls drizzled in date syrup, the rich sweetness of the local palm tree fruit is a defining flavour.

Al Fanar Seafood Market also sells a selection of traditional Western confections from the Sixties and Seventies, stock that recalls an age of sweet imports from allies. The British berry-flavoured drink Vimto, first made in Manchester, England in 1908, is another popular purchase from the restaurant’s ‘tuck shop’, and a traditional gift shared between families during the religious festival Ramadan.