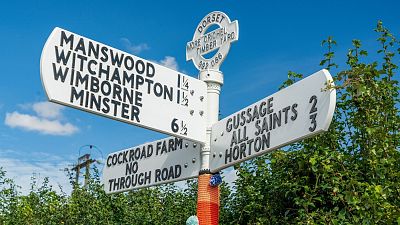 The UK has some interesting names for its towns and villages. We take a look at some of the highlights.   -   Copyright  Unsplash
By Sarah Palmer  •  Updated: 23/08/2021

For a small island, the UK is home to a diverse range of accents and dialects - which have, over time, made for some interesting place names dotted around the various counties and countries.

These are some of our favourites.

The ancient market town of Cockermouth is actually quite self-explanatory: it sits at the mouth of the River Cocker in England’s far north.

The Georgian village is located right on the edge of the Lake District National Park. It was the birthplace of famous poet William Wordsworth, who wrote about the area’s outstanding beauty in many of his works.

Cockermouth offers visitors cosy pubs, easy access to the western Lake District and the Solway Coast and lots of family-friendly experiences like the aptly named Taste Cumbria festival. That’s fine with us if it’s fine with you, Cockermouth.

Perhaps one of the most frequently cited ‘unusual place names’ in the UK, this picturesque hamlet in Dorset does what it says on the tin. The name - which dates back 1000 years - means ‘farmstead on the stream used as an open sewer’.

A few years ago locals had to fork out for a heavyweight stone entrance sign because bemused visitors kept stealing them. If you fancy staying, we can confirm the place now operates 21st century standard sewage works.

Bitchfield in Lincolnshire is made up of two small groups of buildings connected by a road. While the village itself is the sleepy sort of place you might imagine, there’s plenty to see and do in the area.

Nearby Grantham is a pretty market town which boasts a famous local lineage including Margaret Thatcher, which seems a bit on the nose.

Among a whole catalogue of unusual Essex place names (including Steeple Bumstead and Ugley) is Fingringhoe.

The old Roman river port roughly translates as ‘hill-spur of the dwellers on the finger of land’. Visitors come for its nature reserve and a picture by the sign.

Apparently residents just tell people they’re from Colchester to save on the questioning.

A small settlement on the Orkney Islands, Twatt is the perfect destination to explore Scotland’s Orkney Islands in all their rugged beauty. Not to be confused with another Twatt on the Shetland Islands.

Wetwang in East Yorkshire is somewhere between the capital city of York and Malton.

This town booms in the summer months, when people head to the village pond to enjoy fish and chips from the local shop.

Full of history, there have been several ancient burial sites discovered in the surrounding area. Wetwang has two pubs to ‘wet’ your whistle - and there’s a scarecrow competition every year just to top off the quaintness.

Close to Holmfirth in Huddersfield, Upperthong is a well-connected little village.

But if they didn’t have it bad enough with the name, locals have chosen to host a Welly Wanging World Championship every year, where competitors throw wellington boots as far as possible.

You’ll have to read between the lines with this one. Radio stations that filter listeners’ messages (to counteract swear words) sometimes mysteriously filter out messages from Scunthorpe residents.

Why you should visit the island paradise of black sand beaches