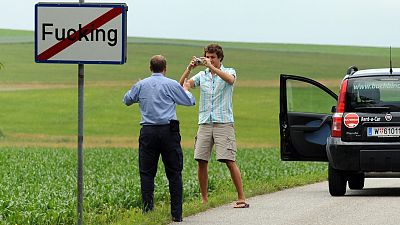 "Sorry, you’re from where?"

While in general, town names are more or less benign and uninteresting, there are many around the world that make people do a double-take. Invariably, most if not all of these names gain attention because they’re considered expletives, double entendres, or have sexual connotations.

For the people who call these towns home, their name is either a blessing or a curse.

They may live in Dull but the villagers who call this hamlet in Perthshire home are anything but.

Besides having stunning Highland scenery on their doorsteps, people from Dull also have quite a sense of humour. Spinning the uninspiring village name to its advantage, Dull twinned itself with Boring in Oregon, USA, in 2012, before welcoming Bland in New South Wales, Australia, into the fold.

The "Trinity of Tedium," as they’ve been dubbed, has become a tourism tour-de-force, and from the signage, we can see why.

The peak of Wank mountain in the Bavarian Alps has attracted hikers for decades, helped in popularity by the opening of the Wankbahn, a cable car system built in the late 1920s. Besides outdoor pursuits, the main draw is the unparalleled view from the summit.

While you're at the top of the mountain, stop in for some lunch at the Wankhaus, before perhaps taking the cable car back down the peak and staying overnight in the town of Wank itself. If you've really enjoyed your visit, there's always the option to buy a Wankpass for the cable car (valid for a year) should you wish to come again.

There's not much to get excited about in this small, quiet town in rural Minnesota. In some ways, you could say it’s an anticlimax.

What’s perhaps more surprising is that there are four places in the US bearing this particular name, all equally small and pastoral. Climax in Minnesota, which took its name from a chewing tobacco company, perhaps leans into its unusual name more than the others, having adopted the one-time town slogan: "Climax. More than just a feeling".

It's also a stopping point on the road to the communities of Heart's Delight, Heart's Desire, and finally, Heart's Content.

As it turns out, Hell does freeze over. The mercury in this small village west of Trondheim in central Norway can plunge as low as -25C in the depths of winter.

But while the novelty of the village’s name has turned it into a minor attraction for English speakers, Hell actually stems from the old Norse word for "cliff cave".

Then again, given it is adjacent to a busy airport, maybe it was aptly named after all.

While most places learn to embrace the attention that comes with a notorious name, there are some that have reached breaking point from the attention.

Fuckingers - the residents of Fucking - were so weary of constant ridicule and the theft of signposts that the town voted to change its name in November last year.

Despite evidence that its former name dates as far back as the 11th century, Fugging - as the town is now called - is looking to begin a new chapter away from hordes of selfie stick-wielding tourists and tasteless jokes.

Fortunately for the French, Condom is a faux ami, or "false friend," and will only make Anglophones snort with childish laughter.

Condomois - as the locals are known - live in blissful ignorance in this rather handsome town in the southwest of France.

As the capital of the Armagnac region, where the famous brandy originates, the town also boasts a rich architectural treasure trove, including elegant 18th-century mansions and a 16th-century gothic cathedral.

As with many towns in the US (and the list is inexhaustible, trust us), the art of town naming has relied heavily on old parlance and phrases.

Intercourse, for instance, which was renamed in 1814 to replace the name Cross Keys, is believed to have been so named either as a reference to fellowship and community or its geographical position on a crossroads.

There’s a particular irony, though, in giving a town in the heart of what is now Amish country such a euphemistic name. At least it wasn’t called Horneytown (North Carolina) or Spread Eagle (Wisconsin).

Despite attractions including a neolithic stone circle that ranks in importance with Stonehenge, and boasting some of the best beaches in the UK, the road sign for the small, euphemistically-named settlement of Twatt on Orkney is still a hit with visitors to the archipelago.

There’s also a rival Twatt in the Shetland Islands.

It has to be said, the sleepy hamlet of Anus in Burgundy is in the back of beyond.

The minuscule settlement does have a few things going for it, including being in wine country and not far from sites such as a Crusades-era cathedral in nearby Clamency.

Unfortunately for it, though, Anus is the word for that particular orifice in both French and English which might make marketing it as a tourist destination a challenge.

The title of funniest town name in Ireland is a tough call but for those with a blue sense of humour, Muff in County Donegal takes the crown.

Honourable mentions include Bastardstown, Fannystown, and Horetown, which are all in County Wexford. Given its proximity to the sea, watersports are a popular pastime in Muff. In fact, the town boasts Ireland’s oldest scuba diving club, Muff Diving Club.

The townsfolk also hold an annual Muff Festival around August.

The small village of Clit is in the very north of Romania, and had it not been for the fact its name is a colloquial abbreviation for clitoris, it's doubtful the village of just over a thousand inhabitants would be on the world map at all.

That being said, the nearby city of Suceava is home to some of Romania's cultural treasures, including the ornate frescos of St John the New Monastery, a UNESCO world heritage site, and the ruins of a 14th century fortress.

As with Condom, Bitche doesn’t mean the same thing that you’d think it does in English. But that won’t stop English-speakers sniggering at the sight of it on a map or imagining signs saying "You are now leaving Bitche".

Located in the Moselle département in the northeast of France, Bitche is on the border with Germany and as such is the site of a colossal, centuries-old hill fortress that has formed an integral part of the country’s defensive line in every conflict since the 1870-71 Franco-Prussian War.

Had the road signs directing you to Cocks not have caught your eye, you probably would have missed this sleepy Cornwall hamlet altogether.

A narrow, tree-lined lane takes you off the main road and eventually down a steep hill to a smattering of quaint cottages and farmhouses which will leave you yearning for the country life. It helps that the coast is only a few miles away so you can have the best of both worlds.

Where have we missed off our list? Let us know by tagging us on Twitter using @euronewstravel.