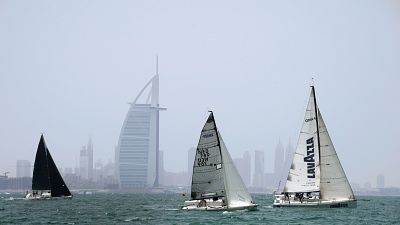 At the weekend, airline pilot Bernado Landaboure swaps his Boeing 777 to join his race team on a 35ft sailboat.

Euronews caught up with him at a sailing regatta off the Dubai coastline.

His Lavazza sailboat is just one of 40 vessels that raced in the regatta organised by the Dubai Offshore Sailing Club.

Landaboure explained that competition is intense between teams in each of the club's four divisions, which range from beginners to experienced sailors.

Landabourne has brought together a team of 15 people who sail on rotation for each race due to crew limits imposed for COVID safety reasons.

"Onboard, we have lawyers, business people, engineers and a pilot. Having a mix of people is something that is important for me. Everyone learns from each other," he said.

Landabourne explained that the only incentive for the crew to take part in races is their love of sailing: "This is not a professional team. I don't pay the guys to be part of the team, but I try to keep them motivated with good equipment, good standards and events."

Dubai's fleet of sailboats typically has a mix of hobbyists and semi-professional crew.

Captain Landabourne told Euronews that it is beneficial to have experienced sailors onboard to raise the standards and inspire and teach the more novice crew members.

Landabourne learnt how to sail in his native Argentina as a child. At the age of 21, he became an airline pilot and he explains that many of the skills involved in flying a large aircraft can be applied to sailing, giving him a unique advantage.

"Sailing and flying have a lot of things in common such as meteorology, navigation, physics, and weather dynamics.

"The principle of sail power is the same principle of an aeroplane wing: The moment I learnt that I could apply my flying knowledge to sailing, it helped me a lot," he said.

The Dubai sailing scene is very active, with the Dubai Offshore Sailing Club at its core, offering a range of different lessons for all age groups.

Landabourne explained that the club has started using a "crew back" list for social sailing, which gives people the opportunity to volunteer on the crew of boat owners who need more hands on deck.

To ensure safety, a reference is required from a club member confirming an individual's ability to sail.