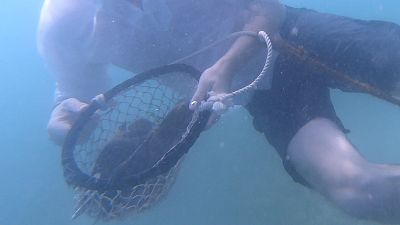 The economy of Dubai and the wider Gulf region has predominantly been based on oil. Since the early 1990s, the emirate has diversified and focused on the tourism industry, attracting holidaymakers from around the globe. The foundation of cities like Dubai was built on an age-old industry that has been present in the region for over 7000 years - pearl diving.

The once-lucrative industry is a heritage that Emiratis are proud of. One man who is keeping this tradition alive is Major Ali Al Suweidi. Euronews joined Major Al Suweidi on his traditional pearl diving boat, locally known as a Jalboot Dhow.

Equipped with wooden pulleys and ropes made from palm, stepping onto the sailboat is like stepping back in time with nothing but a medical mask to remind you that the year is 2021. The Al Suweidi family are known as some of the last remaining pearl divers. Major Ali tells Euronews that he has learnt everything he knows from his father and grandfather… two generations from a long line of pearl divers.

Major Al Suweidi’s ancestors would undergo annual voyages in the summer months when the water was warmer. Setting off from Dubai Creek, 400 pearl diving boats would spend three months at a time in search of oyster beds.

The pearl divers would dive 20 to 30 meters on a single breath up to three hundred times a day. Major Al Suweidi explained that in some extreme cases when diving over 40 meters, they would make a small incision behind their ears to ease pressure equalisation.

Tools of the Trade

To reserve energy, the divers used a system of ropes. Hooking their foot into a rope that had a 5kg rock attached helped the divers sink to the seabed without exerting energy by swimming.

Breathing techniques and ear equalisation was aided with a simple nose peg. Major Al Suweidi points out that today's pegs are made from wood, whereas historically, they were made from turtle shell or gazelle horn. At lower depths, the shell or horn would contract and pinch the nose tighter. As President of the Emirates Marine Environmental Group (a non-profit organisation working on protecting the UAE's marine life), he prefers the wooden option.

To gather their bounty, pearl divers would hang a netted basket around their neck. The moment their basket is full of oysters, two tugs are given on the attached rope to signal the crew on deck to reel in both the diver and oysters.

Onboard, the success of a day's work was only found out at sundown because superstition suggests it’s bad luck to open oysters until all daily dives are complete.

Pearls are graded by their size and colour. Local water conditions and the diet of the oyster can affect the pearl colours. However, pink pearls are the most sought after and can reach the highest value.

The treasures gathered on the coast of Dubai were primarily transported to and sold in India. Mumbai became the worlds largest pearl market, where the Arabian pearl was dispatched to Europe.

The pearl is a natural gem created by an oysters defence against parasites. Encapsulating the parasite in the pearl protects the oyster. In the 1920s, a technique was used to inseminate a parasite to farmed oysters. This Japanese technique created more uniform and cost-effective pearls. The reduced demand for natural pearls and was crippling to the pearl diving industry.

In Dubai's gold and diamond park, a reputable jeweller told Euronews that natural pearls are graded by their carat weight rather than their size in millimetres. He also said that real pearls fetch a much higher price today due to their rarity in the world.

Today pearl diving remains only as educational experiences and memories of an industry long gone.