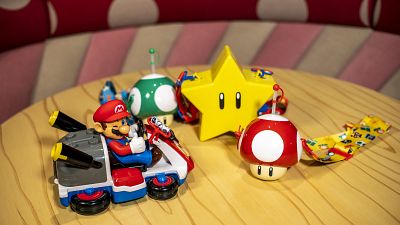 Mario and his brother Luigi have finally got their own theme park. Super Nintendo World features a "Mario Kart" ride in a real-life Bowser's Castle.

The attraction, which features bright, block-like surroundings straight out of the classic "Super Mario" games, is part of the existing Universal Studios Japan amusement park in the western city of Osaka.

The retro design proved an instant hit with fans.

"I've been playing Mario since I was a boy. I didn't expect that I can get into the world of Mario, so I'm very excited,” said university student Hiroki Kono.

Office worker Rei Higashimoto added: "I have an annual pass so I knew this Mario world was being prepared and waited since a year ago for this day to come."

And Rana Iida, also an office worker, said: "I'm very happy and I have great expectations as I longed for this."

The attraction was due to open last summer but was delayed by the coronavirus pandemic.

"It took almost a year longer than we had expected to open this place, and we are really glad and feel fulfilled at the moment,” said Marketing Communication Manager of Universal Studios Japan, Ayumu Yamamoto.

“But this one year wasn't actually just a waste of time as it was beneficial for us to pursue creating the world that Nintendo wants for their fans and their brand."

Other Super Nintendo World parks are being built in Los Angeles, Orlando and Singapore.

But don’t get your hopes of visiting the original too soon - initially only locally-based visitors can go amid international travel bans.

While you can’t visit in person, click the video to see what Mario and the rest of the gang get up to in real life.

Iceland will now accept arrivals from anywhere if they are vaccinated