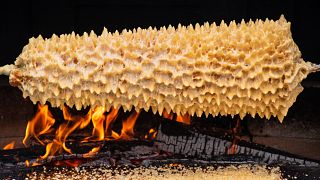 Forget tarte Tatin and chocolate gelato. In our roundup of Europe’s quirkiest desserts, we transport you to Istanbul for a taste of chicken breast pudding, to Scotland for deep-fried chocolate bars, and to Portugal for a 19th-century bacon lard creme caramel.

The Dutch have feasted on Hollandse Nieuwe – raw, brine-soaked Atlantic herring that’s gulped down in one with pickled gherkins and raw onion – since the 14th century. In 2016, an ice cream parlour in Rotterdam took the Netherland’s love of raw herring to greater heights when it introduced a Hollandse Nieuwe-inspired ice cream, which consists of an icy blend of raw herring, onion, sugar, and cream. The taste – salty, vinegary, and extremely fishy – is so strong that the ice cream parlour recommends a smaller scoop than that of your raspberry vanilla or cookie dough flavours, and has even stirred up some controversy among locals.

Get a taste: Several Rotterdam ice cream parlours now offer raw herring ice cream during herring season (May-July), but to get a taste of the original Hollandse Nieuwe scoop, stop by De IJssalon in Meent.

In Scotland, a trip to your local chippy (fish and chip shop) wouldn’t be complete without a battered Mars bar. The popular British caramel and nougat-filled chocolate bar is first chilled to avoid it melting in the hot oil and then covered in a thick batter (the same batter used to deep-fry cod or sausage) and deep-fried until golden. The result is a crispy-on-the-out-side, gooey-on-the-inside piece of chocolatey heaven that sends even the most experienced foodies into a grease-induced comma. If you’re more of a Twix or Snickers kind of person, that’s ok: most fish and chip shops in Scotland will happily deep-fry those for you too.

Get a taste: Many chip shops in Scotland will offer this artery-clogging dessert, but none are more proud to show off their fried chocolate skills than Aberdeenshire’s Carron Fish Bar, the unofficial birthplace of the battered Mars bar.

Tavuk göğsü, or “chicken breast pudding”, is a Medieval Turkish dessert made with poached chicken. A delicacy in Istanbul during the Ottoman Empire (when it was common to include poultry in desserts), the finely minced or shredded chicken breast is sweetened with a white sauce made with blended rice, butter, sugar and milk, then sprinkled with cinnamon, vanilla, or almonds. If it weren’t for the name, the chicken in this centuries-old dessert would go unnoticed; the meat is simply used to achieve the pudding’s firm but smooth consistency, which is best eaten with a fork rather than a spoon.

Get a taste: You’ll find Tavuk göğsü served in coffeehouses across Istanbul. For the best-prepared versions, though, look out for cafes with “muhallebicis” (pudding shop) in the name.

In Southeastern Spain, where citrus fruits grow in abundance, no part of the precious lemon tree goes to waste. Since Spain’s Muslim rule, every spring in Murcia young green leaves known as paparajotes have been plucked, coated in sweetened dough, and deep-fried in olive oil, then sprinkled with sugar and cinnamon to finish. The leaf, which has a bitter taste even after frying, isn’t eaten. Instead, Murcianos expertly pull the batter off with their fingers, the dough infused with the zesty citrus oils from the lemon leaf it was cooked with.

Get a taste: You’ll need to travel to the Spanish city of Murcia for a taste of paparajotes, where they’re most common during the Fiestas de Primavera (spring festivals).

Born in a parish of northern Portugal’s city of Braga, pork lard pudding, or Pudim Abade de Priscos, is a creme caramel-like dessert made with egg yolk, sugar, port wine, and pork fat. The dessert takes its name from the Abbot of Priscos, a famed religious figure and chef who first served the smooth, sweet morsel to Portuguese royals and aristocrats in the late 19th century. Pudim Abade de Priscos was one of the few recipes the abbot made public, meaning this historic dessert can today be found in bakeries and cafes across Portugal.

Get a taste: The best place to try Pudim Abade de Priscos is in the city of Braga, where several bakeries sell it to take away and restaurants serve it for dessert.

There’s average cake, and there’s the Lithuanian Sakotis cake, a Christmas tree-shaped dough made by spit-roasting batter over an open flame. Like a giant sweet kebab, the batter is ladled over a hot rod over five hours to achieve the pine tree-like spikes. Germany, Hungary, and Poland have similar variations of the cake, but Lithuania’s version, which can reach a height of more than 300 centimetres for special events, is the most striking of them all. Choose from a plain doughy Sakotis, or opt for one topped with melted chocolate or candied fruit.

Get a taste: You’re most likely to find the best Sakotis cakes in Lithuania during Easter, Christmas or at a local wedding. However, Lithuanian bakeries and shops also sell the cake year-round.

Along the West and Eastern coasts of Ireland, an iodine-rich seaweed called Caragreen, or “little rock” in Gaelic, grows in abundance. Local chefs and home cooks use the seaweed, which works well as a natural gelling agent once soaked in warm water, to thicken up desserts, soups, and broths. The most famous is the Carageen seaweed pudding or “moss pudding”, a custard-like dessert made by cooking the seaweed with milk and eggs and then sweetening it with vanilla, chocolate, honey or fruit.

Get a taste: Carageen seaweed pudding is best eaten along Ireland’s West or Eastern coastlines where the seaweed is at its freshest.