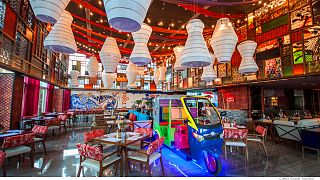 There are people of more than 200 nationalities living in Dubai, and all have brought with them a taste of home. Many expats have opened their own restaurants or set up franchises of familiar chains from home, making the emirate’s dining scene one big melting pot of flavours from around the globe.

From India to Indonesia and South Korea to Syria, expatriates from Asia make up the biggest demographic in the UAE. In particular, there are no shortage of South Asian restaurants in the city, with some of the best and most budget-friendly found in old Dubai, on almost every corner of Deira and Satwa. For finer dining, Burj Daman in Dubai International Financial Centre is home to Carnival by Tresind. It serves contemporary fusion food with Indian flavours and a side of theatrics in a restaurant full of whimsical design elements and with a vibrant atmosphere.

Countries in Southeast Asia – including Indonesia, Vietnam, Thailand and the Philippines – are also well represented on Dubai’s culinary circuit. There are a number of great pan-Asian restaurants offering menus that encompass most of the cuisines from this region. Popular options include Miss Tess in Taj Hotel, Dubai and Mr Miyagi’s, which has branches in Dubai Media City and Studio City. Both spots boast lively vibes and regular entertainment, making them great for a night out. Elsewhere, Sui Mui has just opened at the Westin Dubai Mina Seyahi, with a menu that spans Filipino, Korean, Vietnamese, Thai and Japanese cuisines.

The UAE is in the Middle East, so it should come as no surprise that there’s a strong scene for authentic food from the region. Levantine cuisine – food from Lebanon, Syria, Palestine and Jordan – is particularly popular. There are hundreds of great eateries representing these nations, so it’s hard to go wrong when choosing a spot. One great option for tourists, however, is Abd El Wahab, which is on the fifth floor of the Pier 7 restaurant complex and offers good food, a relaxed atmosphere and gorgeous views of Dubai Marina from the terrace. Over in the Dubai Mall, Al Hallab serves classic Lebanese food and has an outdoor space offering a front-row seat for the choreographed performances by the famed Dubai Fountain.

There are plenty of North African restaurants around Dubai, too. Brand new on the scene is Moroccan spot Bab Al Mansour, which opened in early 2019 by Dubai Opera, offering beautiful Marrakech-inspired interiors and a very authentic menu, with everything from harira soup and chicken tagine to beef brain with charmoula.

The rest of Africa and South Africa

One of the best spots in Dubai to go for a taste of Africa is Kiza, in Dubai International Financial Centre, as everything from the food to the decor to the music is inspired by the continent. The menu encompasses dishes from all nations, from Nigeria and Cameroon to Uganda and South Africa. Hot stews, fresh salads and hearty meat platters are just a few highlights.

For something more casual, Nigerian restaurateur Gbemi Giwa has opened a branch over at Jumeirah Lakes Tower called the Gbemi’s Kitchen, which is inspired by West African flavours.

Ethiopian food has quite a following in Dubai, too, and nowhere has a more loyal clientele than Bonne Annee, a family-run spot in Deira, where the injera, tibs and shiro keep diners coming back time and again.

For years, diners in Dubai have enjoyed access to plenty of French, Italian and British restaurants – and there is still no shortage today. For the best of the best, head straight to La Cantine Du Faubourg for Parisian vibes and eats, visit Il Borro Tuscan Bistro for incredible Italian food and a gorgeous setting and, for a sampling of great British cuisine or afternoon tea, go to Rhodes W1 by Gary Rhodes, who settled in Dubai years ago. The venue has the look of an English garden, while the menu is woven with elements of the Mediterranean.

More and more, other European countries now have culinary representation across Dubai too. There are now a few hot Spanish spots (Salero is recommended), a Portuguese eatery, Tasca by José Avillez, and a host of new Greek tavernas (Gaia and Mythos are particularly good).

Balkan cuisine can also be found at 21 Grams, which was established by Serbian restaurateur Stasha Toncev and serves wholesome, authentic food inspired by recipes from across the region.

It’s not hard to find North American cuisine and fast food chains across Dubai. From Wendy’s to the Cheesecake Factory, the city is peppered with familiar logos from the States. Try Claw BBQ, a Southern-style crab shack at Souk Al Bahar where there’s a lively atmosphere as diners get messy hacking into crab shells. Elsewhere, find a taste of Canada at award-winning Weslodge, which attracts a cool crowd in the evenings, thanks to the good music and superior food (try the lobster poutine).

For a taste of Mexico, La Carnita and Luchador are two of the most popular. At the latter, you'll find incredible views over Palm Jumeirah.