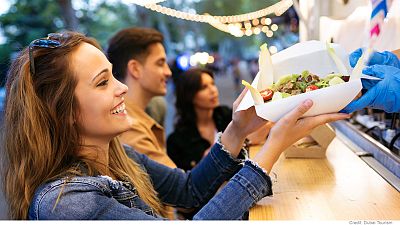 Around the world, food trucks have been a common sight for years. The earliest forms of the service in the U.S can be traced back to as early as the 1600s when vendors served travellers from pushcarts and wagons. In Dubai, however, the trend has only really taken off in the past few years.

Salt, which was founded by Emirati entrepreneurs Deem Al Bassam and Amal Al Marri began as a burger truck on Kite Beach in 2014. The vehicle is often cited as the first of its kind in the city – and it’s still one of the most popular. Since then, Salt has expanded. Trucks in multiple other locations often have queues snaking round the block, full of people waiting for a taste of one of their legendary sliders, made with deep-fried chicken or wagyu beef and soft-serve ice cream.

Calle Tacos was another pioneer on the scene. Although it has since taken a hiatus while its owners work on Urban RetrEAT a food incubator hub in the neighbouring emirate of Abu Dhabi. This hub may soon also branch out to Dubai, says co-founder Dana Al-Sharif. Back when Al-Sharif set up her Mexican food service, it wasn’t easy being a vendor, due to a lack of regulations around where and when food trucks can operate. This is why she decided to shut up shop and help other budding vendors who might be struggling instead.

In the past five years, the number of food trucks in the area has grown exponentially. The custom was expanded even further when events, such as the Dubai Food Festival and TruckersDXB, truly embraced the trend.

Then came Last Exit, a park dedicated to food trucks. Developer Meraas opened its first branch of the park on the border between Dubai and Abu Dhabi in 2016. Initially, it had just 12 vintage airstreams that were leased out to well-known brands such as Clinton St. Baking Company, Operation Falafel and The Hot Dog Stand, with one or two saved for local, independent companies. Today, there are four Last Exits, each with a unique theme from post-apocalyptic, Mad Max-style to retro Americana. The parks are now home to a medley of food trucks by big-name restaurant chains and lesser-known spots born in the region.

While these parks certainly dominate the market these days, the independent trucks are still thriving. Nowadays, you can find vendors all over the city serving new and exciting flavours. Many of them are camped out at cluster at spots like Dubai Marina, Kite Beach and La Mer. As well as this, weekend markets and food events are held frequently in the city throughout the year.

As regulations become easier to navigate and more budding foodies look to set up shop, the scene is only set to get bigger.