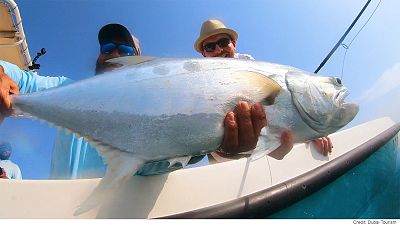 When most people think of fly fishing they think of being far out in the wilderness, away from civilisation, by a river or somewhere in the ocean. But Ocean Active Fly has re-imagined this scene - offering urban fly fishing right in the middle of Dubai. This is the first fly fishing operation in the Middle East.

The founder, Nick Bowles, explained to Euronews why fishing there are fishing opportunities in Dubai:

"Dubai’s built the biggest man-made reefs with the palm islands and that, so it’s created a huge habitat."

Artificial reefs can lead to a quick increase in the local fish population. They draw plankton which smaller fish can prey on which then attracts bigger fish suitable for fly fishing.

One species drawn to the artificial reefs in Dubai is the queenfish. They can grow to be over a metre long and up to 15 kilograms, although most are about half that weight. This kind of fish is particularly good for fly fishing because of its visual takes and the fact it swims in schools.

Fly fishing differs from more conventional spin fishing. Instead of having a heavy lure at the end of the fishing line, fly fishers have a 'fly' which is lighter and less likely to scare away game. The fly stays on the surface of the water where fish will be attracted to it, thinking it is prey.

With ocean fly fishing you're constantly on the move to find the next school of fish "So you literally run - shoot, run - shoot."

But the unique part of fly fishing in Dubai is the proximity to its skyline. Fly fishing is done close to the shore so anglers are surrounded by the city's landmarks.: the Burj Khalifa, the Burj Al Arab, Palm Jumeirah and Dubai Marina.