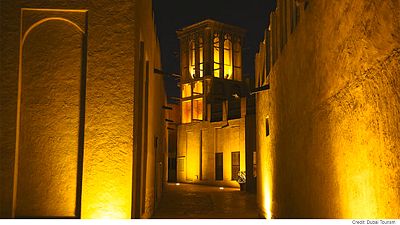 An introduction to both the traditional and contemporary food of the United Arab Emirates – and the best places in Dubai to taste it.

When most people think of Middle Eastern cuisine, their minds automatically go to dishes such as hummus, falafel and pita bread. But there is so much more to it than that, and recipes across the region vary from country to country. Even within the Arabian Gulf (locally called the Khaleej) – an area comprised primarily of the UAE, Bahrain, Saudi Arabia, Kuwait, Oman and Qatar – you’ll find the cuisines differ.

In the Emirates, it all stems from three main diets: the Bedouins’, fishermens’ and farmers’, encompassing a range of natural ingredients such as meat and camel milk, hammour and shrimp, and plenty of dates. Today, this translates to dishes like harees – cracked wheat with chicken – or balaleet – a breakfast of sweet vermicelli pasta topped with an omelette – and luqaimat, a fried dough dessert.

Traditionally, these dishes were cooked in Emiratis’ homes, and as the local population in the Emirates is much lower than that of the expatriate community, it stayed that way for decades. The dining scene was primarily made up of international restaurants, and those that catered to expatriates’ native cuisines, from Indian to Italian and everything in between.

In the past few years, however, Emirati cuisine has been enjoying somewhat of a renaissance, with new eateries popping up, serving both authentic dishes and modern interpretations of the staples.

Al Fanar Restaurant & Café, which has venues across the UAE, is a great example – and it has even recently branched out to England, where a spot now sits next to Gloucester Road tube station in south west London, introducing England to a taste of the Emirates. Al Fanar is best known for its décor, designed to look like a 1960s Emirati merchant’s home, and home-style cooking.

Elsewhere, at the Sheikh Mohammed Centre for Cultural Understanding, curious tourists and residents can enjoy a super-traditional breakfast, lunch or dinner, as Emirati presenters teach them about the UAE’s rich history and heritage. The experience also includes a tour of the local area, whether that’s Al Fahidi Historical District or Jumeirah Mosque, and a question-and-answer session.

For a more up-to-date experience, there’s Seven Sands, located at The Beach near Jumeirah Beach Residences, a busy tourist hotspot. It brings together culture and cuisine from the seven emirates that comprise the UAE, and serves beautifully presented dishes like choubab, saffron-infused crepes stuffed with balaleet, and maleh korse, fish served on a bed of sautéed onions, bell pepper, mushrooms and parsley.

Meanwhile, the chefs at Aseelah, which is based in the old part of Dubai, at the Radisson Blu Hotel Dubai Deira Creek, take inspiration from the past and create entirely new dishes with modern flair. For instance, on the menu you’ll find a pan-roasted quail salad stuffed with pistachio, an Arabian-style soup made with slow-poached sustainable seafood, and home-smoked rack of lamb covered in saffron-cardamom gravy. A trio of camel sliders served with a variety of sauces also feature – and it’s a popular dish.

Trendy Logma in Box Park is also a must-visit, for its casual and yet contemporary food, and edgy interiors that feature camel motifs. The menu boasts more fusion offerings, like the Logma Benedict, with poached eggs in shakshouka sauce served on mini khameer bread and topped with Hollandaise and Khaleeji spices. The paratha served with cream cheese, hot sauce and Chips Oman (a popular brand of crisps in the region) is also a not-to-be-missed dish.