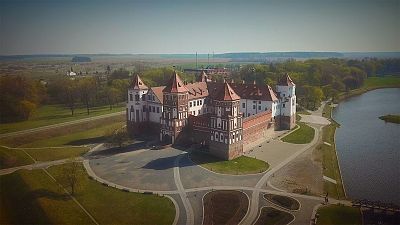 If you were to drive south-west from Minsk, for just over an hour, you would probably come across a truly unique-looking structure.

It is most likely to be Mir Castle, a one-of-a-kind architectural wonder situated in the heart of Belarus.

The structure was built at the beginning of the 16th century, but its unique design was largely influenced by the later Gothic period. It also combines elements of Renaissance and Baroque styles.

The castle's surroundings also influenced its appearance. It is situated in an area with a history of cultures clashing, but also uniting.

It was originally built to protect the area from external enemies, such as Crimean Tatars, however it was later owned by the Radziwiłł family, who used it for hunting and entertaining high-profile guests.

The fortress was left abandoned for nearly a century after it was seriously damaged during the Battle of Mir in 1812, and later belonged to Poland between 1921 and 1939.

Later, in 1941, when Germany invaded the Soviet Union, the castle was used as a ghetto, where around 800 Jews were imprisoned.

After Belarus was liberated in 1944, local people whose homes had been destroyed sought refuge within the castle. The last family to live there moved out in 1962, and more than twenty years later, work began on restoring the structure.

All of these historical events left their mark on Mir Castle, leaving it a fusion of archetectural designs from different eras and cultures.

Kira Rusan, a tour guide at the site, said: "The castle combines elements that, at first glance, seem to be completely incompatible and that's what makes it so unique. In 2000 our castle was included in the World Heritage List by UNESCO, and it was a great honour for us."

Today, the castle is open to the public, as a living testament to Belarus’ turbulent history.