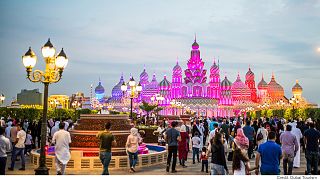 The world’s biggest indoor theme park is based in Dubai, while the neighbouring emirate of Abu Dhabi is home to the planet’s fastest roller coaster, at Ferrari World. So any trip to the United Arab Emirates is not complete without a visit to one of its top theme parks – even if you’re there during the height of summer.

These are our pick of the best parks in Dubai:

You get four in one at this family-friendly entertainment complex. It all begins at Riverland Dubai, where the different parks converge. While this is where you buy your tickets, there are plenty of experiences here to get you in the mood for the day – and entry is free. Take a hike down the American-inspired Boardwalk, or visit India Gate, where musicians and acrobats perform. There’s also a medieval-style French town and The Peninsula, a piazza boasting 19th-century-style architecture that bridges the various districts.

If you have kids in tow, we suggest checking out Legoland Dubai and Legoland Waterpark, which boast between them more than 40 Lego-themed rides, 20 water slides, a host of shows and other attractions. It’s all specifically designed for families with children aged two to 12.

For the older set, visit Motiongate Dubai, where movie-themed rides, coasters and theatre shows are inspired by Hollywood’s largest studios: DreamWorks Animation, Columbia Pictures and Lionsgate. See some of your favourite films – from The Hunger Games to Zombieland and Kung Fu Panda – come to life.

Alternatively, for a true taste of Asia, head straight to Bollywood Parks, the first theme park of its kind. Here, five colourful, creative zones inspired by India’s world-renowned film industry offer a host of experiences, from street food stalls and a Broadway-style Bollywood musical to adventures in the “Rustic Ravine”.

You’ll find this tourist attraction at the world-famous Atlantis The Palm resort. There’s a lot to do and see here, including Aquaconda, which is touted as the world’s largest and the first dual slide-within-a-slide (as its enclosed tube weaves in and out of the flume-style ride).

Aside from the rides, you can also book yourself in for a host of marine-life experiences. This includes scuba-diving with dolphins, swimming with sharks and visiting Dubai’s largest aquarium, where more than 60,000 animals reside. A selection of educational programmes are also offered, including junior lifeguard training and marine mammal conservation talks.

The world’s largest indoor theme park features four distinct sections. You start at the IMG Boulevard, the centre of everything and the link to all the other zones. It’s where you’ll find a bunch of attractions, such as the spooky Haunted Hotel, as well as a host of dining and retail options. Then branch off to the Cartoon Network area, which younger children will love. It’s where their favourite shows come alive, including The Amazing World of Gumball, The Powerful Girls and Ben 10.

Big kids should head to the Marvel zone, where the rides are based on the world’s most popular superheroes, from Spider-Man to The Hulk and The Avengers. Then make your way to the Lost Valley – Dinosaur Adventure, a faux foliage-strewn section based on the prehistoric lost world of dinosaurs. This is where you’ll find the park’s fastest roller coaster: The Velociraptor (it’s not for the faint-hearted).

This seasonal theme park springs to life between the months of October and April. It’s the epitome of kitsch – but in a really, good way. Last season, Global Village was split into 27 pavilions, representing countless countries from around the world, across five continents (Asia, Africa, Europe, North and South America). There was a floating market, a circus, a carnival, Ferris wheel and shows, as well as more than 100 food stalls and retail kiosks, plus restaurants. It’s more of a funfair than anything else – there’s nothing high-tech to it, but there’s plenty of good old-fashioned family fun to be had for the entry price of Dh15 (EUR3.6). Every season offers something a bit different, too. In 2019, the family fun kicks off again on October 29.

Not only does this stalwart waterpark have lovely views of one of the emirate’s most famous attractions – the Burj Al Arab – it also has a unique theme: it’s based on the story of Juha, a character drawn from Arabian folklore. Throughout the park, there are 30 rides and attractions that are suitable for the whole family. Perhaps its most famous, however, is the Jumeirah Sceirah, also known as one of the tallest and fastest free-fall waterslides in the world. It’s a whopping 120 metres tall and sliders can reach speeds of up to almost 50 miles per hour.