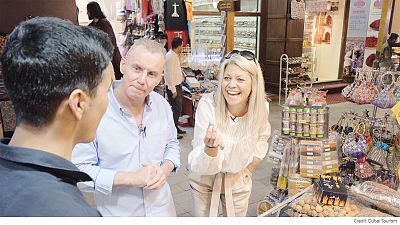 Taste, Euronews' food programme, has just dipped into the melting pot that is Dubai and come up with another culinary offering for you.

We met up with Michelin starred chef Gary Rhodes who, after years working in his home country the UK, now calls the United Arab Emirates home.

As a port the city is not just a meeting place for people traversing the region but for all kinds of cultures, foods and ingredients from across the Gulf region and beyond.

Euronews' Jane Witherspoon met up with Gary who shared his inside knowledge on what smells and tastes so delicious there.

First, as they toured the spice souk, she asked him which flavour most captures Dubai's food.

"That’s a tough one but I think if you look at one of their spices, it’s a mixed spice and it’s called Baharat and that contains four main ingedients. You’ve got cinnamon, coriander, cardammon and a little touch of nutmeg as well. That really sums up every kind of spice that is used in this part of the world."

Next they headed for Dubai's Jumeirah Fish Market to feast on the catch that's been landed.

Gary picked out a fish with a familiar enough name, but one that might be misleading.

"Sardines I absolutely love. Again, I’ll eat those all day. Just sort of very quickly cooked. It’s a variety. It’s a variety they are calling mackerel but that’s very different to the mackerel we get in the UK."

Next it was high time to visit Gary's kitchen at his RhodesW1 restaurant for a fry-up - although at the last minute the Michelin mastro eschewed the "mackerel" for a more familiar offering, salmon.

"So, what I thought I’d make for us is just a nice little salmon," he said, wielding the pan.

"And that, I’m just going to lightly pan fry. But I thought I’d serve that with a nice little risotto on the side."

"Right now the cooking of this fish. There’s a sizzle and ... that is telling me how far that is cooked at the moment."

With the salmon ready, Jane needed to know how her risotto was being dressed up.

"Most risottos as you know will contain parmesan cheese or something like that. I’m not going to be adding anything like that because I don’t think that parmesan is going to marry very well with a bisque sauce."

"Just baste it with this lovely sort of lemon butter. And now we’re ready to dress."

"And there you have it. Pan fried salmon with a little confit lemon risotto with asparagus and a little salmon bisque sauce."