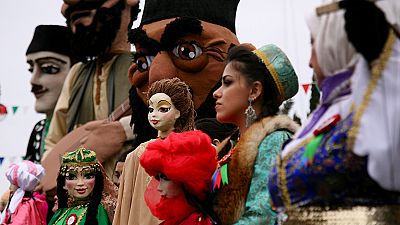 Every year about 300 million people worldwide celebrate Novruz, Central Asia’s new year. Marking the end of winter and the beginning of spring, it is observed in a number of countries, and its origins have been lost in time.

Novruz is celebrated on the day of the Spring Equinox from the Caspian Sea to the Balkans, in Central and South Asia. In 2009, it was added to the UN’s Cultural Heritage list.

Traditions vary from country to country and region to region, but all of Azerbaijan observes Novruz. Preparations start a month in advance, as Seyfaddin Rzasoy, an Azeri folklore expert, explains: “According to ancient beliefs, the world was created from four elements: earth, fire, water and air. Every Tuesday, one of the elements awakens. On the last Tuesday (before Novruz) the air wakes up, nature breathes it in and rises.”

Food provides a particular insight into the significance of Novruz, as we learn at Baku’s Taza bazaar in the company of Elmin Sharifov, one of the country’s most respected chefs. The stalls in the huge market groan under the weight of vegetables, fruit, herbs, meat and fish.

After buying alcha (dried plum paste), Elmin goes looking for a key element of the feast: “This fish is called kutum. We’re going to make levenghi with it, which is a traditional dish from the region of Lenkaran. It’s made with nuts, onion, and alcha.”

The second main dish is plov, a centuries-old rice recipe famous throughout central Asia and the Caucasus. It has hundreds of variations. Elmin is making traditional Turshu govurma, with lamb, chestnuts, alcha, raisins and apricots.

Novruz is, above all, a family holiday. Baku resident Arzu Melikova says it’s the most popular feast in Azerbaijan: “It’s the main holiday for us. It evokes memories from childhood. This is a holiday for kids. We celebrate it at home every year, the whole family gathers.”

At Arzu’s home, food is at the heart of the celebration as the whole family gathers around. Recipes and even dishes are passed down from generation to generation. Arzu’s mother, Khumar, showes us a large metallic pot: “This comes from my grandma. It’s very old, craftsmen made it out of copper,” she says.

Everybody takes part in the preparation and everything on the Novruz table has a hidden significance. There are seven things starting with the letter ‘s’, because the number seven represents a model of the universe. A ring in the fish’s mouth represents prosperity.

Another Melikova family-member, Naila, tells us about one ‘s’: “Samani has to be on every table during celebrations, as the main symbol of Novruz. We light the candles, the whole family gathers around the table and, according to tradition, the number of candles corresponds to the number of family members,” she says.

Novruz is strongly linked with fire, a symbol of purification and of Azerbaijan itself, a country of spontaneous flames that has long attracted fire worshippers. Jumping over the flames of a dying bonfire represents renewal, but it’s perhaps not so easy to do after such luxurious dining!