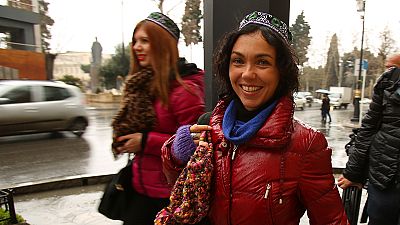 Azerbaijan’s capital Baku, is a surprising outward-looking, high-tech city. It is undergoing a huge restyling; in the past few years a large part of the centre has been restored or rebuilt.

The city is situated on the western shore of the Caspian Sea in the south of the Absheron peninsula. It has a population of about three million people. Its architecture is simply astonishing.

Heydar Aliyev Center, designed by world renowned architect Zaha Hadid, has grown into a landmark of modern Baku. It was completed in 2012.

The Flame towers are another iconic example. Located on a hill overlooking Baku Bay and the Old City center, it’s a trio of flame-shaped skyscrapers promoting Baku’s historic identity. The towers are an ultra modern symbol linked to the cult of fire. You can spot them from everywhere in the city. They are more than 200 meters high.

The curvy lines of modern pieces of architecture co-exhist with impressive examples of Azerbaijan’s past. The Old City, including the Palace of the Shirvanshahs and Maiden Tower, became the first location in Azerbaijan to be classified as a World Heritage Site by UNESCO.

Whatever you see during the day is more than matched by the nightscape as the opulent city lights reveal rich detail, illuminating the centre. The whole central city looks like a theatre stage that will leave you speechless. Everything is shiny and classy. Baku feels like the Monte Carlo of the Caucasus.

The reason that brought us to Azerbaijan, is “Novruz”. It’s Central and South Asia’s “New Year”, and it marks the end of winter and the start of spring.

It was a real delight to be invited to Arzu Melikova’s family in Azerbaijan. Being her guests meant we could experience this special day as if we were part of an Azeri family. With Arzu and her relatives, we delved into a very ancient tradition full of symbolism.

Everything at the dinner table had a meaning and a good omen. Novruz has been celebrated for more than 3,000 years. Today it is still observed by 300 million people all over the world.

The flavours and delights of Novruz