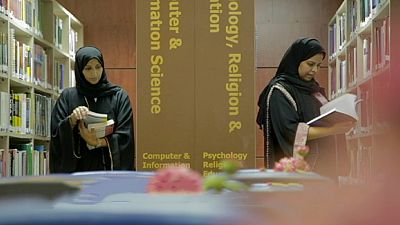 Saudi Arabia is experiencing an educational boom. In 40 years the student population has soared from 7,000 to around one million. Anyone aiming for a place at university is now spoiled for choice.

Riyadh, the capital, boasts some of the largest, several with world-class facilities Most Saudi universities are government funded. But there are exceptions.

Huge amounts of money are being spent on education in the Kingdom. In Riyadh, Prince Sultan University was the first private one to be run on a not-for-profit basis. All the money is reinvested back into students, staff, and the courses they run. And they believe that is the secret to their success.

Prince Sultan University, or PSU as it is known, is relatively small by Saudi standards, with around 4,000 students. An unusually high proportion, around 25 percent. come from outside the country. PSU’s doors are open to the world.

“We look at it as a melting pot. We have faculties from all different walks of life, we have over 34 different nationalities. With also students from different backgrounds. That reflects positively on the process of learning and teaching,” explained Dr Ahmed Yamani, the rector of PSU.

In the classroom, courses on offer range from engineering to computer science, architecture and interior design. All the teaching is carried out in English.

The focus throughout is on employability. Some courses have been designed with the needs of specific companies in mind.

One student, Abdullah Almizel reflected on his course: “This programme takes you from zero to the top in networks and security, or as they say from zero to hero. I’ve got many offers from many organisations with a high salary, I never dreamed about it. Even though I’ve not completed the programme yet. So my family and my friends, they’re all proud of what I did. And even me, I’m very proud of what I did and the decision that I made.”

As in other universities in the Kingdom, women share the same campus but are taught separately. They too study a range of subjects aimed at preparing them for the world of work.

Female architecture student Haneen Al-Ghamdi reflected: “My years at PSU contributed a lot to the person I am today. I learned how to public speak here at PSU, I learned how to socialise better, I learned how to be independent and how to try to reach for my goals. So a lot has changed in who I am.”

In 2006 PSU became the first Saudi university to offer legal training to its female students. Several graduates are now practicing in the country’s courts.

Others are building careers in finance, like Maha Abdullah AlKhwyter now a business analyst.

She said: “I didn’t know specifically like I wanted this job, but I wanted to excel and succeed, and I felt like PSU was the right place. You feel like you can do so many things, you can discover yourself there. It’s a tough university, but that’s the good thing about it. “

Dr Rimah Alyahya, the Dean of the women’s college, spoke with a sense of pride in what her students are achieving.

“Companies or other institutions or even banks, they’re always saying that we want PSU students because there’s that refinement in them, there’s something special that is unique from the other students who come. And it really makes me feel very honoured to be part of this institution and to have a role in helping them to become that way,” she said.

Preparing for work does not just happen in the classroom. There is a range of extracurricular activities from debating societies to charity work. While the students’ competitive edge is also sharpened through sport. It is a key part of the curriculum and every student has to study three modules of exercise.

PSU has already created a first, and it wants to keep stretching educational horizons in Saudi Arabia.

“Prince Sultan University is proud to be directly linked to one of the milestone changes in Saudi Arabia: proving the Kingdom’s success and value of private higher education on a par with that found in other reputable institutions throughout the world,” concluded Dr Ahmed Yamani.