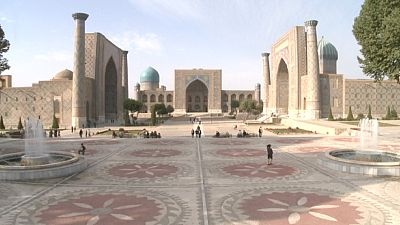 Samarkand is the same age as Ancient Rome, and has been destroyed several times. The city has witnessed the invading forces of Alexander the Great and Genghis Khan.

But, like the Phoenix rising from the ashes, this city always bounced back.

Samarkand is the second largest city in Uzbekistan, and is more than 2,700 years old. Founded in 700 BC by the Sogdians, it has been the capital of several different empires.

Some scholars say its name means “rich city’‘, others “a place where people meet”, and in Persian it’s known as “the stone city.”

Guide Armida Nazaryan elaborated: “Samarkand has always played one of the most important roles in the Silk Road’s many routes because of its favourable geographic location in the heart of the Silk Road. It has traditionally been a crossing point for the east and west.”

The first merchants from China appeared in Samarkand around the second century BC. They were particularly interested in local horses.

For centuries the Samarkand markets were among the most famous markets on the Silk Road. Historian Fazlitdin Fahritdinov said: “There was a special market for silk tissue, and another for coloured tissue. In fact, we’re speaking not just about simple markets, but about very large wholesale markets.

“The trade infrastructure here in Samarkand was probably better-developed than anywhere else on the Silk Road, and that’s why various rulers in different eras chose our city as their empires’ capital.”

The most famous ruler to proclaim Samarkand as the capital of his mighty empire was the Great Timur, known mostly by the nickname ‘Tamerlan’.

He hired the best architects and engineers, intending to create the most beautiful capital in the world. Legends about this ‘fairy-tale city’ spread from Europe to China.

Masterpieces from the Timur era, as well as the ruins of his summer residence in Shahrisabz, 80 kilometres from Samarkand, are UNESCO World Heritage-listed sites.

“Timur liked to repeat one particular phrase: “one can see the might of my empire by looking at the buildings I create”,” said Nazaryan. “The reason Samarkand looks the way it does today is mostly thanks to Timur and his successors (timurids).”

Located in the heart of modern Samarkand, this Madrasah is part of the heritage established by Timur’s grandson, Ulugh Beg.

He was a scholar himself, and created one of the most advanced, educational institutions of his time in this region. The best teachers from different countries came here to give classes.

Another wonder left by Ulugh Beg is his Observatory, which he constructed on one of the Samarkand hills. Only the underground part of the giant sextant has been preserved.

“With the help of this instrument, Ulugh Beg calculated how the planets move every year; the length of a year; and the distance between 1,018 different stars,” explained Nazaryan.

It is dawn and the stars can still be seen in the sky when the Siab market opens. Established in the days of the Silk Road, the market sells the local flatbread – a real treasure.

Legend has it that the Great Timur once asked for the bread during a journey far from home, but the taste was not the same. The cook was granted a pardon because one major ingredient was lacking, over which he had no control – the air of Samarkand.

“This flatbread can only be cooked here,” said Kadirova. “People travel here from other cities, especially to buy it. They even come from Tashkent. It would never be possible to make this kind of bread in other cities.”

A thread of silk still connects modern Samarkand with the time of the Silk Road.

This fabric, produced in the region, is used to create handmade carpets. It takes months or sometimes years to make one silk masterpiece, which can then be preserved for centuries, according to carpet-weaver, Klara Shukurova.

“Every carpet carries a history, and some of the patterns have existed since the times of the Silk Road,” she said.

The El Merosi theatre offers another way to really feel the city’s history. Its historic fashion show presents costumes from different eras in Samarkand’s past. Designers used archaeological discoveries as inspiration for their designs.

The mystery of the costumes from Samarkand’s past has been revealed, thanks to frescos.

The Philippines is battling overtourism with these simple rules