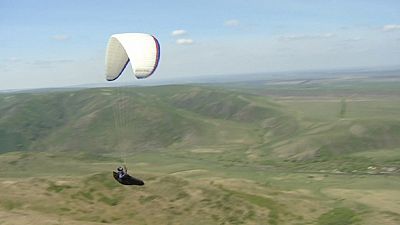 In the south of Siberia, where Russia comes together with Kazakhstan, Mongolia and China, lie pristine lands where people try to live in harmony with nature. In this issue of “Russian Life” we travel to Altai.

The landscape is striking. Taiga, tundra and deserts surround the snowy mountains. This diversity is shaped by the Altai mountain range that stretches for nearly 2,000 kilometres between two climate zones. So all kinds of nature lovers come to Altai, including paragliders.

“When I tell people I’m sorry for the lack of decent roads around here, many reply – that’s fine, better keep it that way, we’re fed up with driving on tarmac, there’s nothing wrong with a little walk,” explains Vladimir Milov, a paragliding instructor

Some come for trekking and hiking, others for fishing or rafting in the rivers fed by Altai glaciers, for climbing or horse riding.

This pristine Altai nature was cherished as sacred by nomadic peoples who inhabited these lands from ancient times. The local tribes, followers of Shamanism, worshipped spirits they saw in mountains, rivers, trees and everywhere in nature.

Ludmila Menyailova is a guide at the Novotyryshkino Heritage Centre. “Altaians have always said that in every living plant there is a spirit, a soul, and for them that was essential,” she says.

The locals still preserve some of this reverence. Though several areas are now being turned into huge resorts, most of the region remains untouched by civilisation. The horse is still the usual means of transport on roads which are impassable for most vehicles.

The word “Altai” comes from “gold” in Mongolian. The middle of May is the beginning of spring time in the Golden Mountains that bloom with wild herbs and flowers. People gather many of the plants and berries and use them as natural remedies.

The numerous caves in the Altai Mountains are witnesses of this area’s long archaeological history. The complex labyrinths of interconnected rooms and man-sized passages seem artificially made – in fact, remains of some of man’s earliest ancestors have been discovered in the caves. But all these caves have been formed naturally by currents of water digging into the limestone layers in early geological times, when this area was the bottom of an ocean.

Today, the diversity of wild plants and the mild climate in the mountainous regions of Altai make it a beekeepers’ El Dorado. The local honey is widely believed to be the most delicious in the country.

“There are no factories, no polluting industries for 200 kilometres around here. People always come to enjoy our honey, and ask to reserve some for their return next time. We don’t produce much, of course, but there’s enough for everybody. Please come and see us!” said Slava Medovukha a beekeeper.

As the spring takes hold in the Altai valleys, the mountain tops are still covered in snow. The Tserkovka mountain rises over Belokurikha, the main resort town, famous for its healing radon springs. The summit of the mountain, crowned with stone monoliths of volcanic origin, has been the holiest place of worship to the powers of Altai nature.

“This place makes your soul rise and sing. All the troubles, all the pains are healed by these mountains. This is what makes them different from any other mountains in the world,” says
Tamara Batuyeva, Director of Belokurikha History Museum.

In our next issue, we’ll be in a Volga region embracing two historical traditions and two cultures – Tatarstan.