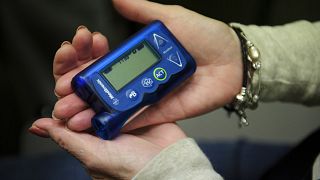 The lives of more than 100,000 people with type 1 diabetes in England and Wales could be changed thanks to a new technology that has the potential to revolutionise the way we treat the condition.

The idea for an artificial pancreas – also called closed-loop system – has been around since the late 1970s, but only recently it has become a feasible option for people with type 1 diabetes.

The technology works by mimicking the functioning of a real pancreas.

It uses a glucose sensor placed under the skin to automatically calculate, with an algorithm, how much insulin to deliver via a pump, freeing people with type 1 diabetes from having to closely monitor levels of sugar in their blood manually and from having to take daily injections.

Those with an artificial pancreas can monitor readings on their smartphones through a system where they can also upload the number of carbohydrates assumed during a meal.

The UK’s National Health Service (NHS) held a world-first trial of the technology last year fitting hundreds of adults and children with type 1 diabetes with an artificial pancreas and found that the technology was more successful than any other device currently available to manage the disease.

The technology was then approved by the National Institute for Health and Care Excellence (NICE), who called for the NHS to agree to a cost-effective price for the device, which currently costs around £5,744.

NICE estimates the current price to be prohibitively more expensive than it should be for the device to be considered a cost-effective use of NHS resources.

The groundbreaking technology is expected to help the NHS cut costs by reducing interventions for type 1 diabetes cases at a time when the national health care service in the UK is really struggling with underfunding and chronic understaffing.

What is type 1 diabetes?

Type 1 diabetes, a genetic condition that usually emerges early in life, is considered much worse than type 2 diabetes, the kind that usually develops over time and is mainly linked to people's lifestyle.

With type 1 diabetes, the immune system attacks and destroys the insulin-producing cells in the pancreas, leading those suffering from the disease to be unable to produce insulin. Without it, blood sugar cannot enter the cells in our bodies and be transformed into energy.

The condition is life-threatening if untreated and can lead to amputations, blindness, and kidney problems.

"Some people living with type 1 diabetes struggle to manage their condition, even though they are doing everything asked of them by their diabetes team. This technology is the best intervention to help them control their diabetes, barring a cure", Mark Chapman, interim Director of Medical Technology at NICE, said.

"This technology has been proven to give the best control for managing type 1 diabetes and should make things like amputations, blindness, and kidney problems possibly a thing of the past", said Professor Partha Kar OBE, a national specialty advisor for diabetes at NHS England.

What about type 2 diabetes and its treatment?

Compared to type 1, type 2 diabetes is much more common. According to diabetes.org.uk, type 1 affects 8 per cent of the population, while type 2 affects some 90 per cent.

Type 2 causes the level of sugar in our blood to be excessively high and the body to produce too little insulin.

While type 2 diabetes can sometimes be managed by assuming a healthier lifestyle, some need insulin therapy or might even require kidney dialysis.

With the goal of making life easier for those patients suffering from more serious symptoms, scientists at the University of Cambridge have recently successfully trialled their own artificial pancreas for use by people living with type 2 diabetes and at risk of kidney failure.

The technology, which combines an app developed at the University of Cambridge called CamAPS FX with a glucose monitor and an insulin pump, was found to help patients safely and effectively manage their blood sugar levels.

"Patients living with type 2 diabetes and kidney failure are a particularly vulnerable group and managing their condition – trying to prevent potentially dangerous highs or lows of blood sugar levels – can be a challenge. There's a real unmet need for new approaches to help them manage their condition safely and effectively," said Dr Charlotte Boughton from the Wellcome-MRC Institute of Metabolic Science at the University of Cambridge.

"Now that we've shown the artificial pancreas works in one of the more difficult-to-treat groups of patients, we believe it could prove useful in the wider population of people living with type 2 diabetes," she added.

The Cambridge team is now trialling the technology on type 2 patients who don't need dialysis.