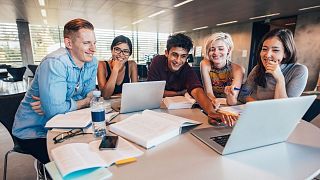 With more than 60 international university campuses and colleges, Dubai attracts multicultural students from all over the world.

When Chinese national Yu Han relocated to Dubai to study hospitality management at Amity University, she also learned a lot about different cultures.

“Ever since I was a teenager, I dreamt of studying abroad and learning more about the world,” says Han. “My parents lived in Dubai for a few years and suggested I move here for my higher education. When I first arrived in Dubai, the cultural diversity was a shock as I had never been exposed to people from so many different countries and backgrounds.”

Positioning itself as a cradle of research and development, Dubai has also attracted renowned R&D centres, including Moorfields Eye Hospital, Johns Hopkins University, AstroLabs and the Google for Entrepreneurs partner network.

Many pupils remain in Dubai after their studies to join the workforce of innovators and entrepreneurs that shape the emirate. A future-forward city, Dubai is the regional base for several Fortune 500 companies, creating exciting employment opportunities beyond higher education. Add to that commendable safety statistics, income tax-free salaries and year-round sunshine, and Dubai has much to qualify itself as a destination for education.

The lifestyle was one of the key reasons that student Leonardo Hechler from Germany chose to attend university in Dubai.

“I decided to study in Dubai instead of the USA or Canada because I wanted to live and learn in a nice and safe environment,” says Hechler, a Bachelor of Business Administration at the University of Wollongong. “Dubai offers everything I was looking for: a modern city with an international community, international cuisine, beach life and, of course, sunshine!“

As Dubai continues to establish itself as a knowledge-based economy and a catalyst for careers, the number of people studying in Dubai has risen to 60,000 – a figure expected to grow with the emirate’s ambitious expansion plans to be a home away from home for 5.8 million by 2040.