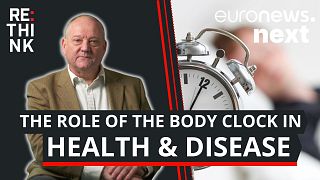 Did you know that the time of day you take medication, get a vaccine, or receive healthcare treatment could have a dramatic effect on its efficiency?

It’s all to do with your internal body clock, or your "circadian rhythms" as they are known in science.

Your circadian rhythms are what help your body adapt to the changes that happen on Earth as it rotates once every 24 hours.

"We can think of circadian rhythms as representing an internal day within and what they do is fine-tune every aspect of our physiology and behaviour to the demands of the rest-activity, the light-dark cycle," explained Russell Foster, a professor of circadian neuroscience at the University of Oxford and Director of the Sleep and Circadian Neuroscience Institute (SCNi).

So, for example, our blood pressure rises in the early morning, in anticipation of increased morning activity and so it can deliver more oxygen and nutrients to our tissues. Cortisol, one of the stress hormones, also rises in the morning in expectance of increased activity.

At the end of the day, your body changes into a different metabolic state. During the night, we start to use stored calories, rather than burning the calories we’ve taken in during the day. At night, there is also a release of growth hormones which regulates tissue growth and repair.

These are just a few examples. Your body is constantly adapting to your sleep-wake cycle, whether you know it or not.

When the sleep-wake cycle is misaligned

We have this internal body clock ticking away but it needs daily adjustment to keep it aligned with the external world.

"The most important factor for that is light, particularly at dawn and dusk," said Foster. "So, light exposure sets the internal clock to the external world".

One of the most obvious examples of a mismatch between the internal clock and the outside world is jet lag. To get over jet lag we need to expose ourselves to the local light-dark cycle. But what about people who always work at night?

"Individuals are trying to work while their entire physiology and their biology is saying they should be asleep," said Foster.

We now know that sleep disruption, either immediately before or after a vaccination will reduce the effect of that vaccination. So...we need to make sure that they're fully rested before and immediately after.

The assumption has often been that nightshift workers eventually adapt to the demands of working at night. But, according to Foster, a massive 97 per cent don't.

"You're constantly running biology outside of its normal range by activating the stress axis," he said.

"The consequences of this long term can be very severe. We now know that there are higher rates of cardiovascular problems, heart attacks, stroke, higher rates of metabolic abnormalities such as type two diabetes and obesity and even higher rates of cancer in long-term night shift workers".

Those are the long-term effects but night shift work, and lack of sleep more generally, also have short-term effects. These can include increased irritability and impulsiveness, lack of empathy, and sense of humour. Our memory is also diminished, says Foster.

"It's not just our memory. It's our ability to come up with new solutions to complex problems," he explained. "So, not getting enough sleep and nightshift work is so much more than feeling tired at an inappropriate time. It's a major impact across the health spectrum".

So, what can be done to combat these risks, in industries where nightshift work is essential?

Foster believes we need to use all this research to help improve conditions and reduce the risk for those workers.

"We now know that sleep disruption, either immediately before or after a vaccination will reduce the effect of that vaccination," said Foster. "So, for our frontline staff, we need to make sure that they're fully rested before and immediately after their vaccination to give them optimum protection".

He says that employers of night workers also need to alert their employees to the associated dangers of night shift work and be vigilant of health issues, with more regular health checks to ensure conditions don’t become chronic.

Foster also says that your biology is so dynamic over the 24-hour day that the efficacy of drugs will change over the course of the day.

"Morning vaccination has been shown to be more effective in generating an antibody response than afternoon vaccination," he said, describing one study of flu vaccines.

"Another really key area has been in the timed delivery of chemotherapy. And the results are quite remarkable in one study. The same drugs, the same concentration, but given at two different times.

Of course, these findings only apply to one specific treatment, vaccine, or drug and cannot be generally applied, however, scientists are beginning to see that time of day is important in many different kinds of medications and treatments.

Hypertensives, and blood pressure medication, are other examples, according to Professor Foster.

"One study has shown that taking them before we go to bed rather than first thing in the morning, can over a ten-year period halve your chances of having a stroke," he reveals.

Unfortunately, all this research hasn’t yet translated into concrete actions in healthcare.

"Sadly, this information about drug timing is not often integrated in drug delivery," admitted Foster.

"There's interest in this area, but the capacity to use this information is just a bit overwhelming with the huge demands that the medical profession is having to face at the moment to deliver any sort of treatment. I think it will come, but it's coming slowly".

How much sleep do I need?

"Sleep is a bit like shoe size. One size absolutely does not fit all,” says Foster, who is also the author of Lifetime, a recently published book on the topic of sleep and circadian rhythms.

"One of the reasons I wrote Lifetime was because I was getting a little bit irritated with the sergeant majors of sleep saying: you must do this and you must do that… Sleep and circadian rhythms differ very much between individuals.

Sleep is a bit like shoe size. One size absolutely does not fit all.

"We've now identified key genes which are associated with morning and evening. Subtle changes in those genes can actually make you go to bed later or want to go to bed early. It's really quite extraordinary".

The first thing we need to do, says Foster, is work out what our body clock type is and how much sleep we need.

"Are you able to function optimally and at a level that you find satisfactory during the day to undertake the tasks that you need to undertake?" he asks. "Then you're probably getting enough sleep at night".

"But if you need an alarm clock to wake you up, if you're feeling tired and irritable throughout the day, if you are dependent upon caffeine and sugar-rich drinks… If friends, family, and colleagues report that you're being overly irritable, unsympathetic, overly impulsive, and actually not performing in the way that you have been. These are all very strong indications that you're not getting the sleep that you need.

“So many people feel that sleep is just what you get," added Foster.

"No, it's not. It's immensely dynamic, not only between individuals but as we age. What we've got to do, each of us is to define our individual sleep needs and therefore change our behaviours to optimise that sleep".

WHO warns of ‘unprecedented’ cholera outbreaks