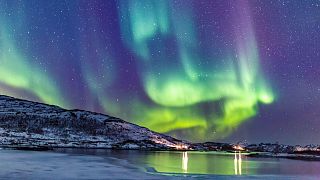 Norway is known for its stunning northern lights and high quality of life. It's now attracting foreign tech talent, but struggling to scale its start-ups..   -  Copyright  Canva
By Pascale Davies  •  Updated: 19/12/2022

With its fairytale fjords, magical northern lights and awe-inspiring nature, Norway is certainly a place that inspires innovation. Therefore, it comes as no surprise that the country is a start-up hub brimming with forward-thinking and progressive ideas.

Norway is also diversifying away from its roots as an oil and gas producer, and its engineering talent is instead joining or launching green energy start-ups. The country, notorious for its high-quality living standards, is also attracting foreign tech talent.

The country of almost 5.5 million inhabitants ranks 24th worldwide for its start-up ecosystem and 13th in Western Europe. It lags behind its neighbour Sweden but is slowly trying to catch up.

As one of Norway’s six unicorns, start-ups with a valuation of more than €1 billion, the ed-tech company Kahoot! says Norway’s society and commercial structure has in the past been predominantly based on commodities, such as oil, natural gas and fisheries.

However, in the last 10-20 years there have been greater efforts to diversify the economy to generate new industries such as technology.

"The key ingredients in laying the foundation for a more diversified and entrepreneurial economy is an educated workforce, availability and deployment of relevant technology, access to capital and a reasonable regulatory framework," says Kahoot! CEO Eilert Hanoa.

"We have seen progress in all of these areas, although there is still a lot of work to be done," he told Euronews Next.

One of Norway’s biggest setbacks is access to investment, which may become all the more difficult with the current economic uncertainty.

"For the Norwegian start-up scene as a whole, obviously the immediate impact is access to capital, which is potentially harder for many now. Also, the rising labour cost and general inflation add to the burden for some," Hanoa said.

"Mobility of talent is probably slightly contracted now after a frenzy period where talent retention was quite hard and many were looking for new career opportunities elsewhere. So I'd say it's probably a mixed picture".

But on a more positive note, he said if you have a start-up that has a strong idea, team and execution, it "is still fully possible to develop well, even during tough times".

One company that rose to the occasion of working during a difficult period was the start-up Fygi, which launched during the COVID-19 pandemic.

The retail tech company offers a secure scan-pay-go system for self-service shopping, which can be done via a retailer’s QR code. It can benefit both retailers and purchasers.

Although the idea was started in Norway, the company also has offices in Poland and in Germany too, which the company says it needs to scale and survive.

I think we can produce very good companies. And the larger ecosystem in Europe needs to be equally developing the next owners of these companies, rather than waiting for the Americans to snap them up

"It's very unnatural to focus only on your home market when the whole market in Norway is too small," said Fygi CEO Amund Skaaden.

"Norway, Sweden, Denmark and Finland have taken much longer to adopt this technology, I would say, than, for instance, Germany. So, we are learning from the German scene".

But the company also has international partners, such as Microsoft, Mastercard and Veeps, and this is the area where it expects to fully thrive

"I would say that we are seeking investment or money into something which is not that common in this country. So that I would say is one of the problems".

How Europe could step up

"What we also see is that despite the global downturn in the market, there are no signs of a dip in this development in the Nordics," she added.

But one thing Grimstad de Perlinghi does worry about is international markets, especially the United States, gobbling up Norway’s start-ups. She argues Europe’s industrial ecosystem also needs to start looking at start-ups seriously and ask itself if there is a better way to make acquisitions.

"I think we can produce very good companies. And I think the larger ecosystem in Europe needs to be equally developing the next owners of these companies, rather than waiting for the Americans to snap them up," she said.

But the lack of funding available can also be due to the nature of Norwegians, meaning it can be difficult for them to sell their services or ask for investments internationally.

"I think there's something good and charming about the Norwegian way of being. So, when they say something, it's actually true and it's probably even better than what they're saying," she said.

"If you want to compete with the other ways of selling your product, I don't want us to lose that Norwegian quality, but perhaps you need to be a little bit braver and a little bit less Norwegian on the commercial side".

As with most countries, Norway is trying to attract foreign talent to boost its tech ecosystem. Although it is reputably one of the world’s most expensive countries to live in, salaries are much higher than in Western Europe – as is the living standard.

In the last 20 years, Oslo’s population grew by 35 per cent and now stands at over 800,000. The number also increased during the COVID-19 pandemic.

"During the pandemic, there was a growth and interest in Oslo, Norway, from people who wanted to be closer to nature," said Siw Andersen, CEO of Oslo Business Region, an organisation which supports Norway’s start-ups and aims to attract international founders.

From Oslo, you can actually take a 20-minute train out of the city and find a cross-country skiing path.

Supporting women in the workplace

But the country has also created an environment for women to thrive in the workplace, with joint paid maternity and paternity possible for up to a year.

Andersen says in Norway this and other initiatives allow women to balance a career and a family.

"I'm not saying that this is unique, but you have free kindergarten, you have free school. The work life, how it works is that here in Norway you work for eight hours. It's not expected that you work 24 hours".

Another way of doing business differently is instead of having a top-down hierarchy in the workplace, there is more of a horizontal structure.

Andersen said that unlike a lot of companies in Europe, there is a "softer side" to the workplace where employees are welcome and not afraid to share ideas and go into the CEO's office.

An 'incomparable' way of living

One company that started in Norway is Promon, a company which protects your apps and phone from threats.

"It was sort of an integral part from day one to look outside, because the Nordic region or Norway is too small of a domestic market to support big growth ambitions," said Gustaf Sahlman, CEO of Promon.

Though it also has offices in the Asia-Pacific, India and the US, the company has kept its Norwegian roots.

"We've taken a lot from the Nordic heritage and we think that as the world goes mobile, this is a transformational technology. In order to do a mobile strategy which respects customer integrity, you need this type of technology," Sahlman said.

Along with the Norwegian model of working, the country’s high living standards have also attracted talent.

Compared to working and living in America, it is “incomparable,” said Promon marketing and communications director Thomas Ford, who is originally from the US but relocated to Oslo.