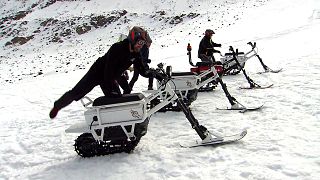 As the ski season gets underway in Europe, a new all-electric snow-bike might be joining skiers and snowboarders in the mountains this year.

The French-made “moonbike,” which retails at €10,680 according to the company’s website, can reach speeds of 42 km/h, has a battery life of 3 hrs and weighs just 87 kg.

Tourism experts from Austrian ski resorts have recently tested it on the Kaunertal Glacier. The silent snowmobile will be available in four Tyrolean ski resorts in the Austrian Alps.

The device will not be let loose on normal ski slopes but will be allowed on special closed snowbike areas or guided trails in the region.

“You need just 5 minutes until you get used to the snowbike, then you accustom yourself and soon you get smart – like on a motorbike, you must lie down in the curves, and more you lie down more you have fun and find stability,” said Mario Bicocchi, who owns a bike rental company in Flirsch, Austria.

“It is electric, it does not cause noise or exhaust fumes,” he added.

Is this electric passenger plane the future of fossil-free flying?