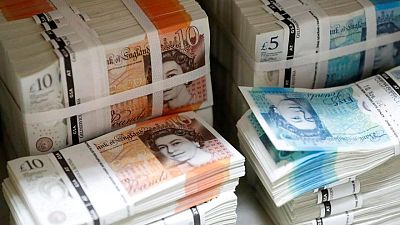 By Huw Jones and Sinead Cruise

LONDON – The Bank of England has intervened multiple times in the UK government bond market in the last fortnight to rein in gilt yields, which rocketed after Britain unveiled a welter of tax cuts to be funded by borrowing on markets.

It shone a light on a little-known but ballooning segment of Britain’s pensions sector – liability-driven investment or LDI.

A moneyspinner for asset managers.

Defined benefit pensions have to make sure that their assets, such as stocks and bonds, can generate enough cash to meet liabilities – the monthly payouts guaranteed to pensioners.

LDI is a popular product sold by asset managers such as BlackRock, Legal & General and Schroders to pension funds, using derivatives to help them “match” assets and liabilities so there is no risk of shortfall in money to pay pensioners.

Pension funds have to post cash as collateral against their LDI derivatives in case they turn sour.

The amount of cash needed rises and falls in tandem with values of the underlying assets tracked by the derivatives, which are a type of ‘insurance’ contract for guarding against unexpected moves in markets.

Interest rates have been inching higher for months as central banks hiked borrowing costs in a well-flagged manner, giving pension funds time to adjust and find collateral over several days.

But when UK bond yields rocketed in just a few trading sessions, it triggered emergency collateral calls for pension funds to cover their LDI-related derivatives in a matter of hours, as rising yields mean the value of bonds falls.

Pension funds struggled to find the cash in such a short time, forcing some to sell gilts, thereby putting further downward pressure on the bond market.

To manage the instability in markets, the Bank of England has pledged to buy gilts worth 65 billion pounds in a scheme designed to take pressure off the pension funds.

But volumes actually purchased have been modest. On Tuesday, the Bank of England bought just 1.95 billion pounds of index linked gilts and just 1.36 billion of ordinary gilts out of a possible 10 billion pounds.

Even after several Bank of England interventions, including a decision to extend the emergency bond-buying programme to include index-linked gilts, the task facing pension funds is intensifying – partly due to fresh collateral calls on newer hedging strategies.

Other assets like property and corporate bonds are also being sold to raise cash, but these can be harder to sell in a hurry and some are being sold at hefty discounts.

The yield on the benchmark 30-year government bonds remains stubbornly above historic norms. It finished September 75 basis points higher than its closing level in August, the biggest monthly rise since 1994.

The BoE Governor Andrew Bailey has said the bank will halt bond buying on Oct. 14, meaning pension funds are running out of breathing space to rejig their LDI strategies and build up their cushion of cash for any further big collateral calls.

However, some industry bodies and investment managers are calling for an extension to the scheme, and some media reports suggest Bailey has privately discussed continuing past Oct. 14.

Pension funds are a cornerstone of the economy, helping scoop up huge amounts of stocks and bonds issued by companies that need cash to operate and grow.

LDI has worked in times of steady markets and rates, but has been found wanting when markets move suddenly, potentially freezing pension funds.

While such a rise in UK gilt yields was a rare event, regulators like the Bank of England will take a closer look to see if changes are needed to LDI, such as asking them to hold larger liquidity buffers to cope better with sudden shocks.