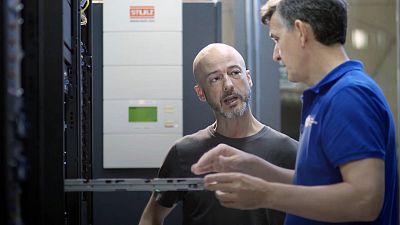 As the scope of Artificial Intelligence (AI) grows, some fear that hyper-automation could lead to a widespread loss of jobs. However, experts argue that AI creates workforce disruption rather than destruction, and that AI will never fully replace humans as it can’t adopt key attributes, such as common sense, creativity and the ability to strategise and communicate effectively.

In a survey by news platform The Conversation, 90% of 1,321 respondents said they would prefer to speak with a live customer service agent. Another survey by marketing firm Forrester showed that 54% of online consumers believe that interacting with a chatbot will have a negative impact on their quality of life.

Anyone who’s experienced an ineffective customer care phone service using a chatbot will appreciate this sentiment – but can AI work for the betterment of humans in other areas? Many believe so.

Ashraf Elnagar, Professor of Artificial Intelligence at the University of Sharjah in the UAE, argues that AI can perform only some of the tasks carried out by humans, therefore AI should be seen to assist rather than replace the workforce.

Speaking at Dubai’s Seamless 2022 exhibition for the fintech, banking, retail, e-commerce and identity industries, he said: “There’s a misconception that AI will replace humans, but AI can be looked at as an empowering tool for those people who are using it.”

Naren Vijay, Executive Vice President of the business intelligence platform Lumenore agrees. He said: “Humans are not replaceable. The sense that humans can bring, especially common sense, is very difficult for machines to do.”

“If you know how to adopt AI, you can do your job better,” added Vijay. “Your efficiency can be improved. It's not a threat to your job at all.”

Elnagar also points out that the AI industry will generate jobs. “AI itself requires a new market of people who run these systems, maintain them and fix them,” he said.

In addition, companies that invest in technology often go on to employ more staff as a result of business growth.

While tech-enabled firms may grow faster than their traditional counterparts and maintain or even grow staff numbers, recorded job losses generally refer to a net figure, meaning a company may have made redundant or replaced those unable to work with new technology while hiring new staff that can.

This is the essence of workforce disruption versus workforce destruction – and it’s not a new phenomenon. Historically, roles within the workforce have continually changed. According to research by the Massachusetts Institute of Technology, 60% of the jobs available today didn’t exist a generation ago.

Technical upskilling is being carried out across industries to update workforces. If it’s offered, embrace it, otherwise, seek it out, advise the experts. Working out how technology can make us better at our roles could be the key to future-proofing them.