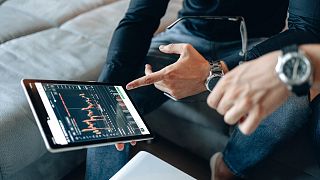 Crypto is predicted to outstrip traditional investments within a decade.   -  Copyright  Canva
By Pascale Davies  •  Updated: 11/05/2022

Cryptocurrencies will see mainstream adoption within the next 10 years, according to a survey from a crypto exchange service.

It found that 88 per cent of institutional respondents and 75 per cent of retail investors believe that crypto will see mainstream adoption within a decade.

The survey also discovered that a further 80 per cent of institutional investors reported that cryptos will overtake traditional investment vehicles.

Levels of trust in the digital currency as an asset class is high, with 71 per cent of investment professionals and 65 per cent of everyday investors stating that they trust crypto.

But trust on a global level is mostly driven by developing countries, the survey showed.

"Where trust in the traditional financial system is low: for example, in emerging economies, 79 per cent say crypto is more trustworthy compared to 62 per cent of more developed financial markets," Bitstamp said.

Last year, El Salvador officially adopted Bitcoin as a legal currency. While some welcomed the move, it was also met with backlash and protests due to the volatility in cryptocurrency prices.

Other investment vehicles in the decentralised finance ecosystem (DeFi) also show strong levels of trust, the survey showed, adding that stable coins, NFTs and blockchain are rising in trust across retail and institutional investors.

However, the survey also said that a "key barrier" to crypto investing is trust in regulation. Almost half of the retail investors surveyed said they see crypto as unregulated.

"This demonstrates a need for stronger regulation in order to increase retail investor trust in crypto, which Bitstamp backs," the survey said.

Governments around the world are starting to back crypto regulation. Earlier this month, the European Parliament voted in favour of new traceability rules for crypto asset providers requiring them to collect information on the holders they interact with.

The proposed rules have sparked concern among cryptocurrency owners, who worry about the implications for their privacy.

"The adoption of crypto and other digital assets is advancing at an unprecedented rate," said Julian Sawyer, CEO of Bitstamp.

“We’ve seen interest propel in the years since the pandemic, and crypto is now part of the wider conversation in global macro-economic matters.

"Our survey shows something we have advocated over a long time: talking about the survival of digital assets is firmly over - the question is now about evolution".

Where in Europe is the most 'crypto curious' country in the world?