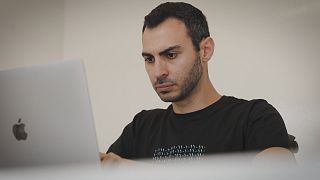 Ray Dargham is the Co-Founder and CEO of ‘Step’ (https://stepconference.com/)), a media company with a suite of virtual and in-person events, podcasts, and newsletters; headquartered in Dubai, UAE.

Originally from Lebanon, Ray had his first experience of managing a business during his senior year in highschool; when he took part in a programme run by Junior Achievement Worldwide; “it was a three-month long programme where as students, we created a company using real money and created a real product, sold it and made a business out of it”, he explains.

This experience had left its mark in Ray to an extend that when he reached his final year in university, and it was time to start looking for a job, he found himself in thoughts; questioning what sort of a life he wanted to remember when he would look back at it in his 60s; “the answer was to have lived an interesting story”, he recalls.

The path to that interesting story for Ray was to start his own company.

After graduating, Ray moved to Dubai to put his plans in action; however, aside from his brother, he did not know many people in town. “When you are first starting anything, including a company, nobody knows you”, he says. Having attended the program in highschool and hosted workshops during his university years, Ray had already witnessed the power of bringing like minded people together. “So I decided, the best thing I can offer is to provide a platform for people to make meaningful connections and help grow their businesses”.

That idea led Ray to host the first Step Conference in 2012 in Dubai, which was a 100 people event and the start of a decade long journey of several successful events that brought thousands of attendees and exhibitors together which played a key role in the development of Dubai’s multi-billion dollar start-up ecosystem today.

“To me that is the most important part; the impact we make in others’ lives. ‘Step’ (https://www.linkedin.com/company/step-conference/) has helped hundreds of entrepreneurs in their journey to building their successful businesses; who today provide jobs, products and services to thousands of individuals”.

‘Step’ (https://www.instagram.com/stepconference/?hl=en) celebrated its 10th anniversary in March 2022, by hosting its first in-person event in Dubai since Covid-19 outbreak. “It blew me away; we had a lot more people, a lot more excitement, a lot more engagement; people missed 'Step”.

Ray and his team have been expanding their product portfolio and reaching to the wider region by hosting their events through their base of operation in Dubai.

Linda Mahoney Founder and partner of BetterHomes in Dubai