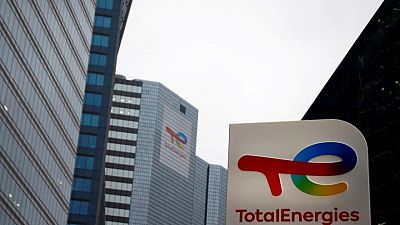 By Simon Jessop and Benjamin Mallet

LONDON – Activist investor Clearway Capital has written to the board of French energy major TotalEnergies calling on it to exit its Russian operations in light of the war in Ukraine or face a vote on the issue at its next shareholder meeting.

The move is the first public campaign by such a fund calling out a leading company over its response to Russia’s invasion of its neighbour and comes as outrage over the war prompts hundreds of international firms across a range of sectors to pull out.

Since the attack launched in February, which Russia calls a “special operation” to disarm Ukraine, many of TotalEnergies’ oil and gas rivals including BP and Shell have set up plans to sell out of their operations in the country, chalking up billions of dollars in losses.

TotalEnergies has halted fresh investment in Russia and suspended trade in Russian oil but stopped short of exiting the country, which makes up 24% of its proven reserves and includes a stake in gas producer Novatek.

After engaging with a number of the company’s top shareholders, Clearway Capital founder Gianluca Ferrari on Friday said in a letter seen by Reuters that he was urging the board to immediately commit to exiting Russia.

“We believe there to be a groundswell of support among the company’s shareholder base for decisive action from TotalEnergies,” Ferrari told Reuters when asked about the move.

Specifically, as well as stopping all spot market purchases of Russian hydrocarbons, the Clearway letter called for it to phase out existing purchase contracts and develop a plan to exit all operations and contracts “as soon as practicable”.

A spokesperson for TotalEnergies reiterated to Reuters the company’s position that it will no longer fund new projects and will implement sanctions put in place by European authorities.

Regarding Novatek, Clearway said the company should immediately flag its intention to sell its stake and cut all commercial ties, including with the Yamal and Arctic LNG projects, as well as operations linked to the Termokarstovoye and Kharyaga fields.

If the company does not meet its demands, the fund said it was looking at filing, together with a number of large asset managers, a joint resolution at TotalEnergies’ annual general meeting on May 25 so shareholders could vote on the issue.

Ferrari declined to name the investors it was speaking to, but the largest of the French group’s shareholders according to Refinitiv data are French asset manager Amundi, BlackRock and Norges Bank Investment Management.

“While the value of our stake is relatively small when compared to that of the overall business, we are confident that there is sufficient support to file a resolution at the upcoming meeting,” he added, without specifying the size of the stake.

When rivals Shell and BP announced plans to exit their Russian operations, investors including the Church of England Pensions Board https://www.reuters.com/business/energy/shell-exit-russia-operations-after-ukraine-invasion-2022-02-28 and British asset manager abdrn offered their support, despite the financial hit.

The geopolitical imbalance caused by the Ukraine attack would directly impact TotalEnergies, Clearway said in its letter, and so “we strongly believe that Total must prepare itself for a world where doing business with or in Russia is no longer an option”.

“In the short term, the risk of sanctions and possible retribution by the Russian state far outweigh any financial benefit of continuing operations in Russia and any business with Russian enterprises,” it said.

In the medium and longer term, companies with Russian operations “will be stigmatised by their customers and by their investors, especially those in the energy space whose businesses directly contribute to financing the Russian state”.

That longer term impact would only be fuelled by the global drive towards sustainable investment, leading to a “material and permanent” effect on the company’s valuation, the letter added.