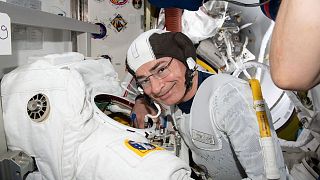 Astronaut and Expedition 65 Flight Engineer Mark Vande Hei inspects a spacesuit in preparation for a spacewalk at the International Space Station in August 2021.   -   Copyright  NASA via AP
By Ian Smith  •  Updated: 18/02/2022

Long-term space missions change the structure and function of astronauts’ brains, a new study has found.

Our brains can change and adapt in structure and function throughout our lives. As human exploration of space reaches new horizons, understanding the effects of spaceflight on human brains has become crucial.

Scientists already know that space travel has adverse effects on the body, such as worsened vision and weakened muscles and bones, but not much is known about the neurological effects.

As part of the study, 12 astronauts who spent an average of six months aboard the International Space Station (ISS) were scanned in an MRI scanner pre-flight, 10 days after flight, and, for eight of them, at a follow-up time point seven months after flight.

The researchers found proof of the concept of “the learned brain,” which is the level of neuroplasticity (the ability to change) the brain has to adapt to spaceflight. They found changes in the neural connections between several motor areas of the brain.

‘Real structural changes in the brain’

“We found structural changes after spaceflight compared to before in tracts that from a functional perspective have roles in sensorimotor, language and visual function,” the study said.

“We initially thought to have detected changes in the corpus callosum, which is the central highway connecting both hemispheres of the brain,” explained Dr Floris Wuyts of the University of Antwerp.

The corpus callosum borders the brain ventricles, a communicating network of chambers filled with fluid, which expand because of spaceflight.

“The structural changes we initially found in the corpus callosum are actually caused by the dilation of the ventricles that induce anatomical shifts of the adjacent neural tissue,” said Dr Wuyts.

“Where initially it was thought that there are real structural changes in the brain, we only observe shape changes. This puts the findings in a different perspective”.

The researchers believe that the study illustrates a need for understanding how spaceflight affects our body, specifically via long-term research on the effects on the human brain.

Current countermeasures exist for muscle and bone loss, such as exercising for a minimum of two hours a day. Future research may provide evidence that countermeasures are necessary for the brain.

“These findings give us additional pieces of the entire puzzle. Since this research is so pioneering, we don't know how the whole puzzle will look yet,” said Dr Wuyts.

“These results contribute to our overall understanding of what's going on in the brains of space travellers.

“It is crucial to maintain this line of research, looking for spaceflight induced brain changes from different perspectives and using different techniques”.