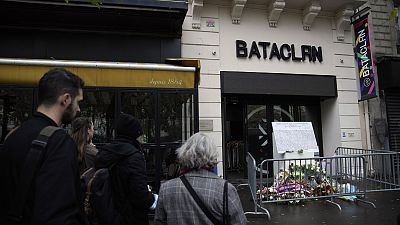 People pay their homage to the victims of the Nov.13, 2015 attacks in front of the entrance of the Bataclan after a ceremony marking the sixth anniversary in 2021.   -   Copyright  Christophe Ena/Associated Press
By Euronews and AFP  •  Updated: 24/01/2022

A Bataclan survivor whose surgeon tried to auction off an X-ray of her injuries on the Internet is "extremely shocked" by the doctor's "mercenary approach" and "contempt", her lawyer said on Monday.

It was revealed at the weekend that Emmanuel Masmejean tried to auction an X-ray of a Bataclan survivor he had operated on - which shows a forearm pierced by a Kalashnikov bullet - as a non-fungible token (NFT) on OpenSea, a website specialising in the sale of digital objects.

"The doctor, not content with violating the medical secrecy of this patient, has seen fit to describe on the online auction site the private life of this young woman, thus making her perfectly identifiable," wrote Elodie Abraham about her client, who wishes to remain anonymous.

Masmejean, a renowned orthopedic surgeon at the Georges Pompidou hospital in Paris, does not seem to have "taken the measure of the act since he did not hesitate to contact the victim on Sunday to justify himself without showing the slightest regret or the slightest empathy towards her," Abraham added.

The surgeon now faces disciplinary action as well as legal proceedings after the head of the AP-HP Martin Hirsch announced on Saturday that the Paris hospitals would take the matter to court, denouncing the auction as an "outrageous act".

'This young patient, who lost her boyfriend in the attack...'

"The victim trusts that the competent institutions and authorities will take all necessary disciplinary and criminal action to ensure that such acts are not possible in the future," said the young woman's lawyer.

She also reserves "the freedom to join these proceedings, so that the exemplary nature of the sanctions is commensurate with the seriousness of the violation and the contempt shown by this doctor".

Underneath the picture listed on the website, the surgeon stated that "this young patient, who lost her boyfriend in the attack, had an open fracture of the left forearm with a remaining Kalashnikov bullet in the soft tissue.

Masmejean admitted the facts to the investigative website, explaining that he had done so "for educational purposes" and has since withdrawn the offer.

Asserting that he "asked himself the question from an ethical point of view," he acknowledged the "mistake" of not having asked the patient's permission for the operation.

"Life for Paris" and Fraternité et Vérité - two associations representing the victims of November 13 - have also denounced "the stupidity and greed" of the doctor, but said the "heinous act" remained "isolated and not representative" of the work of health professionals.

The trial of the attacks that killed 130 people in Paris and Saint-Denis on 13 November 2015 opened in September and is due to continue until May.

NFTs have been soaring in popularity in the past year. In December, the first SMS message sold as an NFT under auction for €107,000.