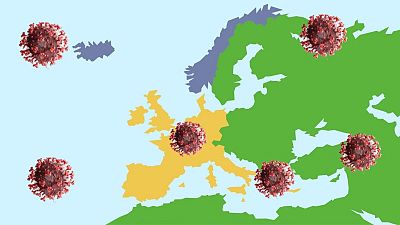 As the Omicron wave continues to surge across Europe, over 30 health professionals and researchers have come together to demand a Europe-wide approach to curb the spread of the latest COVID-19 variant.

The EU member states “now need to show that they can work together in ways that they have not always done before,” they wrote in an opinion article published in the British Medical Journal (BMJ) on Thursday.

A tidal wave of Omicron cases

The World Health Organization (WHO) warned earlier this week that half of Europe will have caught the Omicron variant within the next six to eight weeks.

More than 7 million infections were confirmed across the region in the first week of 2022, more than doubling over a two-week period.

"As of 10 January, 26 countries report that over one per cent of their population is catching COVID-19 each week," said Dr Kluge, WHO Europe's regional director, at a news conference on Tuesday.

The scientists behind the BMJ article say that there is an urgent need to reduce infections to avoid overwhelming health systems and protect public life and the economy.

In the short-term, they call for measures such as working from home, mask mandates, and reducing indoor gatherings in a bid to avoid any further lockdowns.

Ventilation is seen as key

They also want to see the importance of ventilation underlined more at a European level.

“COVID is airborne,” Martin Mckee, Professor of European Public Health at the London School of Hygiene and Tropical Medicine and one of the health professionals involved in the BMJ article, told Euronews Next.

“And if we had understood that from the very beginning and if we had made it a central plank of our response, we wouldn't be in the situation that we're in today.

“So in terms of moving forward, not just with COVID, but with respiratory infections more generally. We need to be looking at getting clean air in the same way that people in the 19th century focussed on clean water”.

He and the other authors of the article would like to see coordinated guidance on the settings for common gatherings at schools and entertainment venues from European countries and “in due course, European legislation on how to make them safe, including ventilation standards”.

Concerns over the impact of long COVID

McKee is also concerned about the long-term effects on those who have had COVID-19.

“I think that with the focus on deaths and hospitalisations and so on, many people have tended to overlook the very important impact of long COVID,” he said.

Last week, the Office for National Statistics in the UK estimated that about 1.3 million people are living with "long COVID" which they classified as symptoms lasting for more than four weeks.

Most people who contract COVID-19 get better relatively quickly, but some have long-term problems after recovering from the original infection.

Long COVID is not yet fully understood, and there is no internationally-agreed definition, so measures of how common it is or what symptoms are involved vary.

The future of the pandemic

The group of researchers also urged European authorities and countries to start planning for the future and the potential emergence of new variants.

“Europe also needs to do more to make the world safe. This includes additional support for Access to COVID-19 Tools (ACT) and the COVID-19 Vaccine Access Facility (COVAX), as well as withdrawal of opposition to measures that would facilitate manufacturing in low and middle income countries,” they wrote.