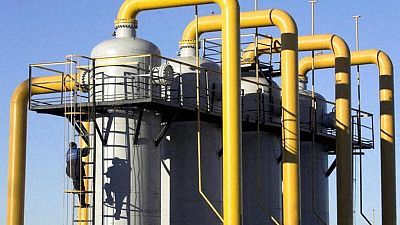 MOSCOW/LONDON – President Vladimir Putin said on Thursday that Germany was reselling Russian gas to Poland and Ukraine rather than relieving an overheated market, adding Moscow was not to blame for Europe’s gas price crisis.

European spot gas prices hit another all-time high this week after the Yamal pipeline that normally brings Russian gas to heat homes and power electricity generation in Germany reversed direction and started to flow into Poland.

“Gazprom is supplying all volumes requested under existing contracts,” Putin said during his annual news conference.

Russia has consistently defended its long-term contracts, saying they guarantee stable volumes and prices. When it sees requests, Gazprom buys extra export capacity, which is in addition to long-term deals, at auctions which is for delivery through the Yamal pipeline and Ukraine.

But Gazprom has not booked additional capacity for Yamal shipments for December or at daily auctions so far this week, and Yamal flows continued in reverse for a third day on Thursday, while shipments through Ukraine were also down.

“Gazprom did not book this traffic as its customers, above all German and French companies, who buy gas via this (Yamal) route, did not put purchase requests forward,” Putin said on Thursday.

“They turned this (Yamal) route into reverse from Germany to Poland… Why? Because we supply gas to Germany under long-term contracts and the price is three to four, (even) six to seven times cheaper than on spot. Just reselling 1 billion cubic metres (bcm) one can earn $1 billion.”

Gazprom increased exports to Europe by 7% in January-November, with Germany buying 5.6 bcm more than a year ago – the volumes Putin said Germany was reselling to Poland and of which some 3 million cubic meters per day ending up in Ukraine.

“Instead of shipping gas to Poland and then to Ukraine … wouldn’t it be better to ship it further to Europe and impact the spot price?” Putin said.

The Yamal reverse has coincided with Gazprom filling the newly-completed Nord Stream 2 pipeline under the Baltic Sea, which does not pass through Ukraine, in preparation for it to begin supplying gas to Europe some time next year.

Some countries have said the activities are linked, but Russia has repeatedly denied any connection between the Yamal flows and priming Nord Stream 2, which is opposed by Ukraine and the United States and is awaiting a green light from Germany.

Russia said the reversal was not political.

The front-month wholesale Dutch gas price, which is the European benchmark, eased to 140 euros per megawatt hour on Thursday, down by 15%.

Traders said news of several shipments of liquefied natural gas (LNG) cargoes heading to Europe had provided some respite although prices are up more than 600% from the start of 2021.

But Russian brokerage Aton said in a note that significant relief was not expected anytime soon, as gas withdrawals from storage in Europe were at 762 million cubic meters, the highest since the start of the heating season.

LNG tankers started to divert from Asia to Europe as prices rocketed, with at least ten cargoes heading west.

Gas prices fuel power bills and are adding to already high global inflation, which Russia has said may backfire in its own economy where consumer prices growth has already hit its highest in nearly six years.