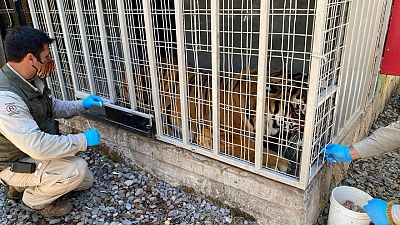 By Rodrigo Gutierrez and Gerardo Gomez

– At the Buin Zoo on the outskirts of Chilean capital Santiago, a veterinarian sporting a tiger-striped face mask administers an experimental COVID-19 vaccine to a tiger in a cage, as another zoo worker feeds the animal chunks of raw meat via a pair of long tongs.

The Buin Zoo, like others around the world, is looking to keep its animals safe from the coronavirus. It is administering an experimental formula donated by global animal health company Zoetis Inc to its 10 most susceptible animals, zoo director Ignacio Idalsoaga said.

On Monday, lions, tigers, pumas and even an orangutan received the vaccine.

“We are using an experimental vaccine that will yield short-term results that will in turn allow us to develop a vaccine that is not on the market today,” Idalsoaga said.

“These are the first doses being produced worldwide, which will enable scientific accuracy and later allow mass production to protect every animal from this deadly virus in zoos like ours.”

The Buin Zoo began searching for ways to keep its animals safe after learning that they – like people – were susceptible to the coronavirus.

“We got the first clue from gorillas in San Diego (zoo),” Idalsoaga said. The Buin Zoo contacted Zoetis, which donated 20 doses that the Chilean zoo on Monday used on animals that are the most susceptible: the great felines.

“We are vaccinating three tigers, three lions, three pumas and our orangutan, because great apes are also susceptible to this,” he said.

After conducting and publishing research on dogs and cats last year, Zoetis is testing the vaccine in different zoos, mainly in the United States, said Cristian Dunivicher, an animal technician with Zoetis.

According to the U.S. Centers for Disease Control and Prevention, the risk of animals spreading the coronavirus to people is low, but the virus can spread from people to animals during close contact.