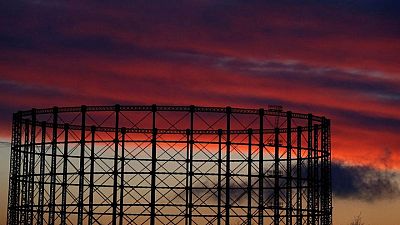 OSLO – Europe’s gas storage levels could hit record lows by the end of the winter heating season due to an early cold spell and muted Russian flows, Gas Infrastructure Europe data showed, leaving consumers and companies with much higher prices for longer.

Gas prices surged this week near to record highs seen in October, driven by cold weather, concern over possible disruption to Russian supply and delays to the new Nord Stream 2 pipeline.

The benchmark front-month contract on the Dutch TTF hub climbed as high as 120 euros per megawatt hour (MWh) on Tuesday, close to record intraday levels seen in early October.

Prices in Europe had jumped this year by as much as 700% by October, with British prices up around 500%.

The power price shock along with rallies in oil prices are also adding to wider inflationary pressures.

Typically Europe would fall back on gas stocks built up over the summer months but demand has been far higher this year as economies started to recover from the COVID-19 pandemic.

“We started winter with the lowest stocks of any recent year, and withdrawals have been quite steep in November, which means the market remains concerned,” Alex Froley, an LNG analyst with ICIS told Reuters.

The European Commision is expected to propose a system for EU countries to voluntarily jointly buy gas to form strategic reserves later this week, but any action is likely to come too late to bolster current stock levels.

Storage sites in European countries and Britain were only 75% full at the start of the winter heating season in October, and have fallen to around 63% full by early December, data from Gas Infrastructure Europe shows.

Since the beginning of November, storage in Europe fell by 14.1 billion cubic metres (bcm) compared with a 5-year average drawdown of 11.1 bcm over the same period, Julien Hoarau, head of Engie EnergyScan said.

A cold snap in Europe has lifted demand while Russian gas giant Gazprom is waiting for a permit to start shipping gas through the contentious Nord Stream 2 pipeline and booking less capacity via existing transit routes through Ukraine and Belarus.

The low storage, high demand and lack of additional supply has also pushed the TTF contract for Q1 2022 above 100 euros/MWh again. The summer 2022 contract is also rising sharply, albeit at lower levels.

A promise by Russia to start filling Gazprom-controlled storage in Europe to help navigate winter has also failed to deliver, with stock levels increasing by a limited 0.1 bcm from Nov. 9-20 before a switch to net withdrawals began, Hoarau said.

Russian supply will remain relatively low until the start-up of Nord Stream 2, other analysts said, with some not expecting flows through the new pipeline to start until September 2022, following a suspension of the German permitting process and growing tensions between Russia and the West over the Ukraine conflict.

“It is virtually impossible to imagine that the Nord Stream 2 Baltic Sea pipeline will go into operation in the current environment,” analysts at Commerzbank said in a note on Tuesday.