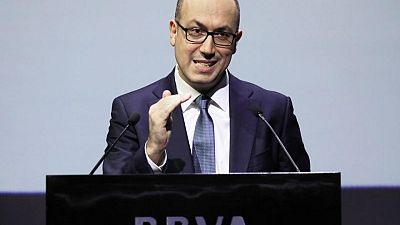 By Jesús Aguado and Emma Pinedo

MADRID -The chief executive officer of Spain’s BBVA said on Monday that the weaker Turkish lira has reduced the price of its deal to buy 50.15% of Turkish lender Garanti by more than 400 million euros at current exchange rates.

BBVA, which already owns part of Garanti, recently offered to buy the remaining stake in the lender in a deal that at the time was worth up to 2.25 billion euros ($2.54 billion).

On Monday, CEO Onur Genc said that the deal would now cost around 1.8 billion euros and capital consumption would be around 1.1 billion euros, down from the 1.4 billion euros initially estimated, as the deal had been structured in liras.

“The currency devaluation actually helps us, so we are going to buy 50% of the bank if we can for 1.8 billion euros in cash after 10 days (of a slide in the Turkish lira),” Genc said.

The deal, which is expected to close in the first quarter of 2022, was announced on November 19 and established a maximum price of 25.697 billion Turkish lira ($2.03 billion) or 12.20 lira per share, should all Garanti BBVA shareholders sell their shares.

“That entry price has improved, and has been improving every single day,” Genc said.

Capital consumption is lower than the price of the acquisition as the bank already consolidates all of Garanti’s risk-weighted assets but not all of its equity.

Still, Genc said he was aware of the short-term risks and macroeconomic uncertainty in Turkey.

On Monday, the Turkish lira slid as much as 4.6% against the dollar, nearing record lows touched last week after President Recep Tayyip Erdogan defended his low-rates policy despite widespread criticism.

Though analysts mostly agree the deal makes senses from a financial point of view, many highlight macroeconomic risks and were expecting BBVA to increase its presence in Spain to counter-balance its exposure to emerging markets.

“There is nothing new to add,” he said, regarding Sabadell, but reiterated the bank, as in other jurisdictions, would analyse opportunities if they added shareholder value.