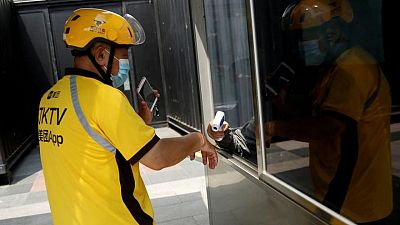 SHANGHAI -China’s Meituan on Friday forecast a weaker outlook for its core food delivery business next year, after a 3.4 billion yuan ($532.24 million) fine pushed it to report its largest-ever quarterly loss in three years.

Tencent-backed Meituan said last month it had been fined by China’s market regulator https://www.reuters.com/legal/litigation/chinese-delivery-giant-meituan-handed-527-mln-antitrust-fine-2021-10-08 an amount that equated to 3% of its domestic sales in 2020 for abusing its market dominant position, marking the end of a investigation that begun in April.

Meituan, whose services include restaurant reviews and bike sharing, has in addition faced economic headwinds as consumption in the world’s second-largest economy slows.

Its core food delivery business saw gross transaction volume growth slow to 29.5% in July-September period from prior quarters, which Meituan’s CEO Wang Xing told analysts was due to COVID-19 lockdowns, floods in central China as well as slowing growth in the country’s catering industry.

“As a result, we expect to see meaningful negative impact on order volumes in Q4 (fourth-quarter) and potentially in the first few quarters of next year,” he said.

The company reported a 10 billion yuan ($1.57 billion) loss in the July-September period compared with a profit of 6.3 billion yuan a year earlier. This was its worst ever quarterly performance since the third quarter of 2018.

Revenue rose 37.9% in the period from a year earlier to 48.8 billion yuan. That compared with a 48.6 billion yuan average of 13 analyst estimates polled by Refinitiv.

The shifts in Chinese shoppers’ spending habits has also impacted other tech giants. On Friday, Chinese e-commerce platform Pinduoduo Inc posted quarterly revenue that missed market estimates on Friday after online sales have slowed down after a boom at the start of the pandemic.

Meituan has been expanding aggressively into hotel booking and community group-buying, taking on Alibaba and Pinduoduo, and has also revamped its strategy to expand from food to retail, forming a dedicated senior team to focus on a goods reail strategy.

Meituan has also come under fire from the government and the public for its treatment of delivery riders, most of whom are not covered for basic social and medical insurance. The firm has since said launched an occupational injury protection pilot program and is planning other welfare initiatives.