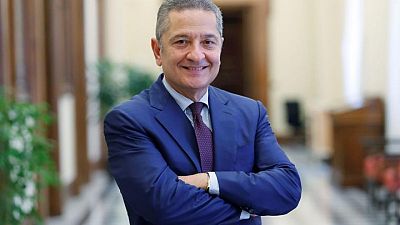 FRANKFURT -The European Central Bank must keep borrowing costs in check as the coronavirus pandemic drags on and there is no sign that inflation is getting out of control, ECB board member Fabio Panetta said on Wednesday.

The ECB is expected to agree on winding down its 1.85 trillion euro Pandemic Emergency Purchase Programme next month and the debate is now on how many bonds it will buy after PEPP ends in March.

Panetta, an Italian and the most dovish of the six members of the ECB‘s board, said the ECB should continue to support the bond market in order to reach its 2% inflation goal even after this current, supply-driven surge in prices fades.

“First, the surge in the number of (COVID-19) infections and the renewed introduction of pandemic-related restrictions in some euro area countries mean that the pandemic is not over yet,” Panetta said at an event.

“Second, an inappropriate, sharp reduction of purchases would be tantamount to a tightening of the policy stance.”

Speaking earlier, Austria’s central bank governor and outspoken hawk Robert Holzmann said he would push for a reduction in bond purchases but that PEPP was likely to be “put in a waiting room” to be used again if needed.

“The statements until now including of my colleagues on the Governing Council all suggest that net PEPP purchases will probably expire in March but that PEPP as such will not be done away with but perhaps be put in a waiting room,” Holzmann told a news conference.

Panetta argued that the current inflation spike, which saw price growth hit 4.1% last month, was due to a mixture of purely temporary factors and global supply shocks that are hurting the economy, rather than leading it to overheat.

He also noted that demand for durable goods had not boomed in the euro area, unlike the United States, and that price growth in the domestic components of inflation was well below headline levels.

“We should not exacerbate the risk of supply shocks morphing into a demand shock and threatening the recovery by prematurely tightening monetary policy – or by passively tolerating an undesirable tightening in financing conditions,” Panetta said.

Echoing ECB chief economist Philip Lane, Panetta added that even a jump in wages this year would not be worrisome if it simply allowed workers to catch up with higher prices.

This puts him at odds with fellow board member Isabel Schnabel, who said earlier this week that inflation could come in higher than expected also because of structural shifts such as the green transition.