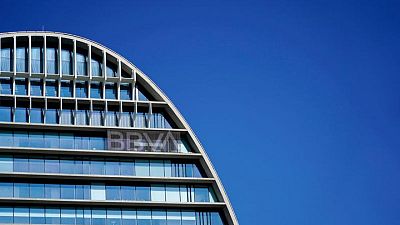 MADRID – Spain’s BBVA on Wednesday reiterated its long-term commitment towards Turkey and said lira depreciation had been taken into account while structuring its recent purchase offer for a stake in Garanti Bank.

BBVA, which already owns part of Turkish lender Garanti, recently offered to buy the remaining stake in the lender in a deal worth up to 2.25 billion euros, taking advantage of a slide in the Turkish currency.

The deal had been structured in lira, which has slid 23% against the euro since Nov. 15 when BBVA announced the deal. In theory that makes the purchase cheaper in euros for the Spanish lender.

“A further depreciation of the Turkish lira was already taken into account in the Garanti deal to still deliver significant returns,” a BBVA spokesperson said.

BBVA‘s comments come after Turkey’s lira tumbled anew on Wednesday towards a record low, before attempting a recovery. Turkish markets have been gripped by worries over soaring inflation and monetary policy.

Last Thursday, BBVA‘s Chief Executive Officer Onur Genc told analysts during the bank’s investor day that he was “assuming more or less around a 20% annual devaluation of Turkish lira for the next 4 years.”

The Spanish lender’s deal to buy the remaining 50.15% was set in liras and established a maximum price of 25.697 billion Turkish liras or 12.20 lira per share in cash, should all Garanti BBVA shareholders sell their shares.

Translated into euros, their up to 2.25 billion euro purchase price could now be even cheaper and worth around 1.9 billion euros with latest declines in the lira.

The deal, which is pending regulatory approval before being launched, is expected to be closed in the first quarter of 2022.

BBVA‘s proposal means it could potentially buy the 50.15% Garanti stake for less than half the 7 billion euros it spent buying the 49.85% stake it currently holds.

Though analysts mostly agree that deal makes senses from pure a financial point of view, many highlight macroeconomic risks from betting on emerging markets.

“We would have preferred BBVA to reduce and not increase the exposure to emerging markets after selling the US business (last year), around 75% of group profits after this deal, and we would have preferred an M&A deal with synergies in Spain or another share buyback,” Spanish broker Alantra recently said.