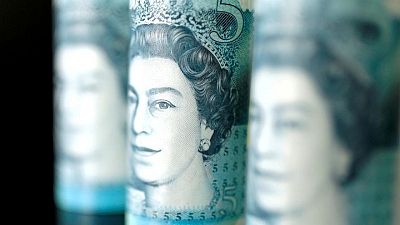 LONDON – The British pound held near its strongest levels since early 2020 against the beaten-down euro on Monday but slipped against the dollar, which rallied after Federal Reserve Chair Jerome Powell was nominated for a second four-year term.

Sterling briefly touched 83.80 pence per euro, a new Feb. 2020 high against the single currency which was hit by Austria’s decision to reimpose a full COVID-19 lockdown. [nL1N2SD0L8]

It held near those levels in late London trade as the euro came under pressure from a broad rally in the dollar after news that U.S. President Joe Biden would tap Fed chief Powell for a second term boosted the market’s U.S. rate hike expectations.

Sterling has firmed more than 2% against the euro since hitting one-month lows on Nov.5.

But against the dollar, the pound shed 0.25% and hit a 10-day low at around $1.3391 as the greenback rallied against major currencies after the Powell news.

There was focus on whether or not the Bank of England will raise interest rates at its December meeting.

In an interview with the Sunday Times newspaper, BoE Governor Andrew Bailey said his concern on the inflation outlook is that it could be “elevated for longer” but there is also a chance that inflation does not prove as persistent as feared.

“There’s nothing in that interview that makes you think that you should be moving back towards aggressive pricing for the December meeting above and beyond what we have now,” said Kit Juckes, head of FX strategy at Societe Generale.

Money markets currently price in about 13 basis points worth of tightening at the BoE’s Dec. 16 meeting.

The BoE wrong-footed many investors this month when it did not lift rates from their record low 0.1%, following comments from Bailey in late October which markets interpreted as a signal that a rate hike was very near.

Since then, inflation has risen to a 10-year high of 4.2% and jobless data has not pointed towards higher unemployment after the end of the furlough scheme – a key concern that stayed the BoE’s hand in November.

Confusion over when the BoE will move has prompted hedge funds to dump sterling with funds the most bearish on the pound since June last year, latest positioning data from Chicago futures markets suggests.

Commodity Futures Trading Commission data shows that hedge funds and speculators increased their net short sterling position to 31,599 contracts in the week to Nov. 16 from 12,093 the week before.