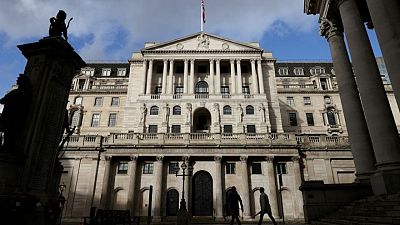 LONDON -Sterling rose versus the euro on Friday as economic data fuelled bets the Bank of England will raise interest rates, while the euro weakened with Austria announcing a new COVID-19 lockdown.

Sterling was 0.3% higher versus the euro at 84.02 pence at 1540 GMT, and was set for its best week against the single currency since Britain’s first lockdown in March 2020.

The euro weakened on Friday as Austria became the first country in western Europe to reimpose a full lockdown this autumn to tackle a new wave of coronavirus infections, and Germany did not rule out doing the same.

Supporting sterling, economic data this week – including UK inflation, job and retail sales numbers – bolstered expectations the BoE is ready to raise interest rates, after it surprised the market by keeping them on hold at its November policy meeting.

“GBP has taken a lot of ground versus the euro in recent sessions with this week’s UK economic data strengthening the case for a potential rate rise from the BoE as soon as next month,” said Jane Foley, head of FX strategy at Rabobank.

“Coincidentally, news of further COVID restrictions in various euro zone countries is weighing on the outlook for growth on the other side of the Channel,” she added.

The BoE is expected to become the first major central bank to raise rates since the start of the pandemic in a bid to tackle inflation that hit a 10-year high as household energy bills rocket.

Chief economist Huw Pill said, however, that financial markets should not assume the BoE’s first step to tighten policy will be to raise interest rates by 15 basis points to 0.25%.

Easing some of the BoE’s concerns about the risks of tightening monetary policy, data showed Britain’s job market withstood the end of the government’s furlough scheme.

Fears of a trade disruptions with the European Union have also being weighing on the pound.

French President Emmanuel Macron urged Britain on Friday to meet its commitments on post-Brexit fishing licences, adding that the UK was playing with France’s nerves.