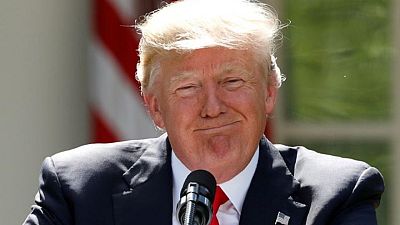 By Chris Prentice and Sohini Podder

Trump Media and Technology Group may have privately held merger discussions with special purpose acquisition company (SPAC) Digital World Acquisition Corp but did not disclose them in its SEC filings or other public documents, the letter said.

A media report stated that Patrick Orlando, the chief executive officer of the blank-check firm, may have held discussion with Trump as early as March, months prior to the SPAC‘s initial regulatory filing in May and its public offering in September.

A spokesperson for the SEC declined to comment, saying “We don’t comment on the existence or nonexistence of a possible investigation.”

Regulatory filings by Digital World between May 25 and Sept. 8 stated that the company has not, nor has anyone on its behalf, held any discussion with potential targets.

“The reports about DWAC and Trump Media and Technology Group appear to be a textbook example of a SPAC misleading shareholders and the public about materially important information,” Warren said in her letter.

Warren, who has requested a response to the letter by Nov. 29, added that the omission has the potential of trapping retail investors in a stock bubble while enriching the SPAC‘s sponsors and the leadership of its target.

SPACs, shell companies which are formed with the intent of merging with a private company to take it public, are required to disclose any direct or indirect discussions with potential targets.

Both Trump Media and Digital World were not immediately available for comment.

The deal, announced in October, would create a social media app, TRUTH Social, which Trump said would “stand up to Big Tech” companies such as Twitter and Facebook.