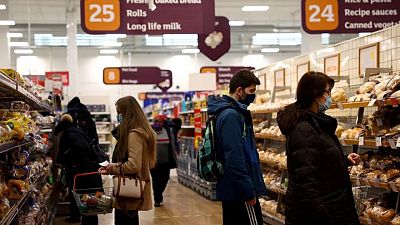 LONDON -Crisps remain in short supply in almost one in three British shops, according to figures released by the Office for National Statistics following production difficulties at a major supplier.

Britain’s biggest crisp producer Walkers, part of PepsiCo, had to scale back production of the popular potato snack at the start of the month after problems with an IT systems upgrade, which it warned could take weeks to fix.

Some 4% of shops visited between Nov. 12 and Nov. 15 had no multipacks of crisps for sale, while 26% had only limited supplies, according to market research by Kantar Public, published by the Office for National Statistics.

Britons each eat on average two packets of crisps a week, Kantar said.

Frozen turkeys – which were the scarcest product last week, when Kantar did not look into crisp supplies – had no or low availability at 15% of shops.

The poultry industry, which has suffered from shortages of workers due to post-Brexit immigration restrictions and COVID-19, said on Monday there would be enough whole turkeys for Christmas but a limited range of other products.

Britain, like other Western economies emerging from the COVID-19 pandemic, has suffered sporadic shortages of specific goods in recent months. But problems in Britain have been exacerbated by Brexit, which limits the ability of employers to hire workers from mainland Europe – most visibly last month when there were long queues at petrol stations.

Separately, the ONS said consumer spending on credit and debit cards fell slightly to 101% of its pre-pandemic average in the week to Nov. 11 from 105% the week before, according to non-seasonally figures from the Bank of England.

The weekly data release showed little change in the volume of online job advertisements or restaurant reservations, which are both above pre-pandemic levels.