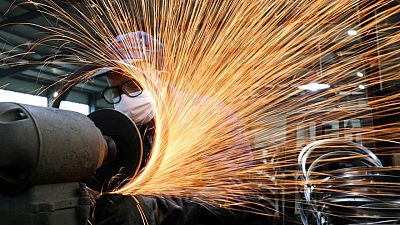 The official manufacturing Purchasing Manager’s Index (PMI) was at 49.2 in October, down from 49.6 in September, data from the National Bureau of Statistics (NBS) showed on Sunday.

The 50-point mark separates growth from contraction. Analysts had expected it to come in at 49.7.

China’s sprawling manufacturing sector has steadily slowed this year, with output in September growing at its most feeble pace since March 2020 due to environmental curbs, power rationing and higher raw material prices.

In line with the softer headline PMI, a subindex for production slipped to 48.4 in October from 49.5 in September. A subindex for new orders also contracted for a third month, coming in at 48.8.

“About one-third of the surveyed companies listed insufficient demand as their biggest difficulty, indicating inadequate demand had restricted their production,” said Zhang Liqun, an analyst at the China Logistics Information Center.

More worryingly, a subindex for output prices rose to 61.1, the highest since 2016 when the statistics bureau started publishing the indicator, suggesting rising inflationary pressures while broader economic growth slows.

“The production index has dropped to the lowest level since it was published in 2005, excluding the global financial crisis period in 2008/09 and the COVID outbreak in February 2020,” said Zhiwei Zhang, chief economist at Pinpoint Asset Management.

“The output price index rose to the highest level since it was published in 2016. These signals confirm that China’s economy is likely already going through stagflation.”

Analysts polled by Reuters expect the People’s Bank of China to refrain from attempts to stimulate the economy by reducing the amount of cash banks must hold in reserve until the first quarter of 2022.

“Production remains weak, indicating the demand problem may be relatively large, and some easing of policy is still needed,” said Zhou Hao, senior economist at Commerzbank.

The official non-manufacturing PMI in October eased slightly to 52.4 from 53.2 in September, when services swung back to expansionary at the end of a COVID-fraught summer.

New clusters of COVID-19 returned in October, especially in the north, which could again disrupt economic activity and deal yet another blow to the services sector because of tough restrictions to contain the disease.

“Due to the impact of the epidemic and weather, consumers were more inclined to spend their holidays at home or travel for short distances,” said Zhao Qinghe, a senior NBS statistician, in an accompanying statement.

While the transport sector including air and railway services expanded, the growth was relatively weak, Zhao said.

China’s official October composite PMI, which includes both manufacturing and services activity, stood at 50.8, down from September’s 51.7.