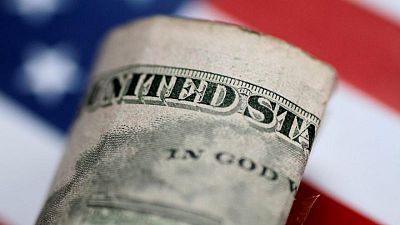 NEWYORK – Major currencies steadied again late on Wednesday after surprising statements from the Bank of Canada provided a burst of volatility in what have been a relatively calm markets.

The moves left the U.S. dollar index down 0.1% to 93.8240 after the dollar weakened against the Canadian dollar, euro and Japanese yen.

The greenback initially lost 0.7% to the Canadian dollar after the Bank of Canada signaled that it could hike interest rates sooner than it had thought. But the move eased and left the U.S. dollar down 0.4% against the loonie.

Before the announcement, which was viewed by some as surprisingly hawkish, the Canadian dollar had weakened to its lowest level in nearly two weeks against its U.S. counterpart.

Traders will have different expectations for inflation in each region, Moya said, adding: “Interest rate differentials are going to be really hard to calculate for some currencies.”

The Bank of Canada comments could be the first trigger for new assessments of how interest rates will change and impact currencies as central bankers try to support the pandemic recovery without unleashing sustained inflation.

Currency markets had moved little in the first two days of this week as traders paused for monetary policy announcements from major central banks around the world, including the U.S. Federal Reserve, which meets next week.

The European Central Bank meets on Thursday and is expected to take a dovish stance.

The German government cut its 2021 growth forecast for this year, as supply bottlenecks for semiconductors and rising energy costs delay recovery in Europe’s largest economy.

Germany’s 10-year bond yield fell to its lowest in more than a week and its yield curve flattened.

Similarly, the U.S. yield curve flattened with the spread between yields on two- and 10-year Treasuries narrowing to fewer than 104 basis points, the least since August. The 10-year yield dipped below 1.53%. It had reached 1.70% last week.

Flattening yield curves in developed markets this week may reflect concern, analysts say, that central banks will err if they tighten policy too early in the face of higher inflation that proves temporary.

The Australian dollar rose 0.3% to $0.752 after data showed that Australian core inflation sped to a six-year high in September, surprising the market. The data prompted a spike in short-term yields.

The Reserve Bank of Australia meets on Tuesday of next week and market pricing is at odds with RBA policymakers’ insistence that there will be no rate hikes before 2024.

The Bank of Japan meets on Thursday and is widely expected to downgrade its economic assessment. Markets have been betting on no rate hike in the foreseeable future.

The British pound was down 0.1% to $1.3740 after the U.K. finance minister unveiled Britain’s budget forecasts..

In cryptocurrencies, bitcoin fell to as low as $58,100 – its lowest in a week and a half – in a move attributed to profit-taking following the all-time high of $67,016 it reached last week. Since that high, the cryptocurrency has fallen more than 13% but was on track for its best month since February.