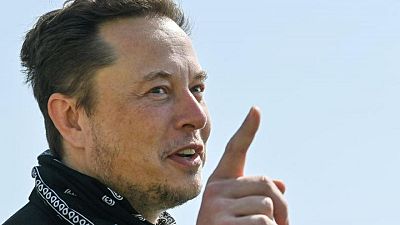 The stock rallied 12.7% on news that Tesla landed its biggest-ever order from rental car company Hertz.

With Tesla’s stock at a record high close of $1,024.86, Musk’s 23% stake in the newly minted trillion-dollar company is now worth about $230 billion, according to Refinitiv.

That stake includes options worth over $50 billion that have vested under Musk’s 2018 compensation package.

In addition, Musk is a major shareholder and CEO of rocket maker SpaceX, a private company worth $100 billion as of an October secondary share sale, according to a CNBC report.

Musk receives no salary at Tesla: his pay package provides 12 options tranches that vest when Tesla’s market capitalization and financial growth hit a series of rising milestones. The options let Musk buy Tesla shares at $70 each, a discount of more than 90% from their current price.

Last week, Tesla reported adjusted earnings before interest, taxes, depreciation and amortization (EBITDA) of $3.2 billion, up 77% from the year before. That was enough to vest his seventh options tranche, worth over $8 billion as of Monday.

Tesla’s six-month average stock market valuation is over $650 billion, clearing the way for all 12 of the options tranches in Musk’s pay package, should the company reach increasingly higher targets related to revenue and adjusted EBITDA for the remaining five tranches.