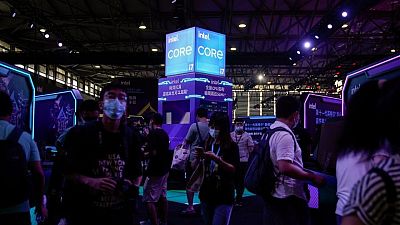 LONDON -The U.S. Commerce Department said on Thursday companies such as Intel and Infineon had signaled they would cooperate with a voluntary request for data on the chips crisis, but may make it compulsory depending on the number and quality of responses.

The White House made the request to automakers, chip companies and others last month, saying the information would boost supply-chain transparency and help understand where bottlenecks exist. The deadline for firms to respond is Nov. 8.

“Companies including Intel, GM, Infineon, and SK Hynix, have indicated that they plan to be very forthcoming with their data. We are very appreciative of their efforts and encourage other companies to follow suit,” a Commerce spokesperson told Reuters.

“The (request for information) is voluntary, but this information is crucial to addressing concerns about transparency in the supply chain. Whether or not we have to use compulsory measures depends on how many companies engage and the quality of the data shared.”

The request has caused concern in Taiwan that companies such as Taiwan Semiconductor Manufacturing Co Ltd (TSMC), the world’s largest contract chipmaker and a major Apple Inc supplier, would have to hand over sensitive data. TSMC said earlier this month it would not leak any sensitive company information.

TSMC said in a statement to Reuters it is preparing and will respond to the U.S. request for information.

“TSMC has been actively supporting and working with all stakeholders to overcome the global semiconductor supply challenge,” it said.

“Looking forward, to increase the demand visibility in this complex supply chain should be the path to avoid such shortages from happening in the future. We have been a strong partner in this effort and will continue taking actions to address this challenge.”

A GM spokesperson confirmed the Commerce Department statement, saying the company “will submit data within the requested timeframe,” while Infineon declined to comment on “ongoing communications with governments.” Intel and SK Hynix did not immediately respond to requests for comment.

“The scope of the requested data is vast and a number of operational secrets are included, which is a big concern in South Korea,” it said in an Oct. 6 statement.

However, South Korea’s trade minister, Moon Sung-wook, told a parliamentary committee on Thursday that companies were preparing to review and submit data that can be provided without violating contractual confidentiality provisions or domestic laws.

Automakers, including GM, Toyota Motor Corp and Renault, have slashed output and sales forecasts due to scarce chip supplies, made worse by a COVID-19 resurgence in key Asian semiconductor production hubs.