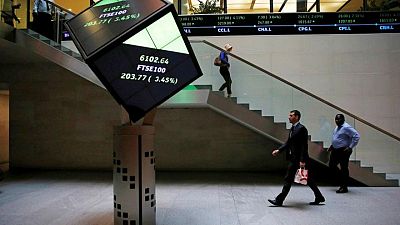 Large dollar earning companies, spirits maker Diageo and Dove soap maker Unilever, were among top performers in the index, as the pound dipped following data that showed British retail sales unexpectedly fell for a fifth month in a row in September.

Investors also digested a recent statement by the Bank of England’s new chief economist Huw Pill that inflation could top 5% and the question of whether to raise interest rates was a “live” one at early November meeting.

“While many still argue that the price pressures are temporary, their expected duration and intensity are rising which is forcing policymakers to consider actions they’d clearly rather avoid,” said Craig Erlam, senior market analyst, UK & EMEA, OANDA.

“As the PMIs have shown, supply-side issues are taking their toll on activity, which won’t be helped by any surges in COVID cases as the northern hemisphere heads into the winter.”

Slowing recovery, supply chain worries and rate hike fears have capped the gains on the FTSE 100 recently, with the blue-chip index slipping 0.4% this week compared with the 0.6% rise among its European peers.

Building materials supplier SIG jumped 5.6% after it forecast full year underlying operating profit to be ahead of market estimates.